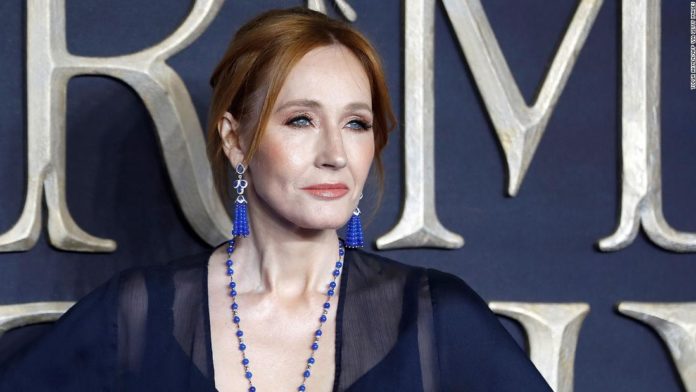 Published Tuesday, “Troubled Blood” by Robert Galbraith — Rowling’s crime writer pseudonym — is the fifth installment in the Cormoran Strike series.
An review of the novel in Britain’s Daily Telegraph on Sunday described the “meat of the book” as an investigation into the cold case of a missing doctor who is believed to have fallen victim to a murderous cross-dresser.
“One wonders what critics of Rowling’s stance on trans issues will make of a book whose moral seems to be: never trust a man in a dress,” reviewer Jake Kerridge wrote.
Mermaids, a UK-based charity which supports transgender children and their families, said it was”concerned” by reports that the book features a character presenting as another gender in order to carry out attacks.
“This is a long-standing and somewhat tired trope, responsible for the demonization of a small group of people, simply hoping to live their lives with dignity,” a spokesperson said in a statement to CNN.
The spokesperson cited an example from Rowling’s second book in the “Strike” series from 2014 — “The Silkworm,” which featured a transgender character as a suspect.
“We are disappointed to hear that the author might be propagating the same, long-standing and hurtful presentation of trans women as a threat.
“As a children’s charity, we are bearing witness to the very real hurt felt by young people who once saw Ms. Rowling’s fiction as a place of comfort, friendship and escape. The author recently expressed support for trans people’s right to live free from persecution. Her latest book might cause those still enjoying her books to question that sentiment,” the Mermaids statement added.
Rowling’s management told CNN that it would not be commenting on the latest controversy.
Paris Lees, a transgender rights activist and British Vogue columnist, tweeted Monday: “JK Rowling’s new book’s about a ‘transvestite serial killer’ Meanwhile over in the real world the number of trans people killed in Brazil has risen by 70% this past year, young trans women are left to burn in cars and men who kill us (for being trans) are pardoned and sent home.”
Likening Rowling to her own creation of the much-disliked “Harry Potter” character Dolores Umbridge, trans actress and writer Jen Richards said on Twitter that the author has become so “obsessed with her deeply prejudiced perspective that she’ll go to any length to remain convinced of her own righteousness, no matter what harm it causes.”
Rowling’s comments and views on gender have made headlines several times this year.
Last month, the author said she would be handing back a prestigious human rights award after Kerry Kennedy, president of the Robert F. Kennedy Human Rights organization, said Rowling’s viewpoint “diminishes the identity” of transgender people.
In June, Rowling sparked controversy after mocking a headline about “people who menstruate.”
“‘People who menstruate.’ I’m sure there used to be a word for those people,” she tweeted. “Someone help me out. Wumben? Wimpund? Woomud?”
Her comments led actors who starred in film adaptations of her books to disagree with her. Among them were Daniel Radcliffe, Emma Watson and Eddie Redmayne of the “Harry Potter” movie series.
“Trans people are who they say they are and deserve to live their lives without being constantly questioned or told that they aren’t who they say they are,” Watson wrote.
Following the reaction, Rowling published an essay about gender identity on her website and explained why she chose to share her views.
“All I’m asking — all I want — is for similar empathy, similar understanding, to be extended to the many millions of women whose sole crime is wanting their concerns to be heard without receiving threats and abuse,” Rowling said.
In her nearly 3,700-word essay, Rowling explained how her own experiences influenced her view, disclosing that she is a domestic abuse and sexual assault survivor.