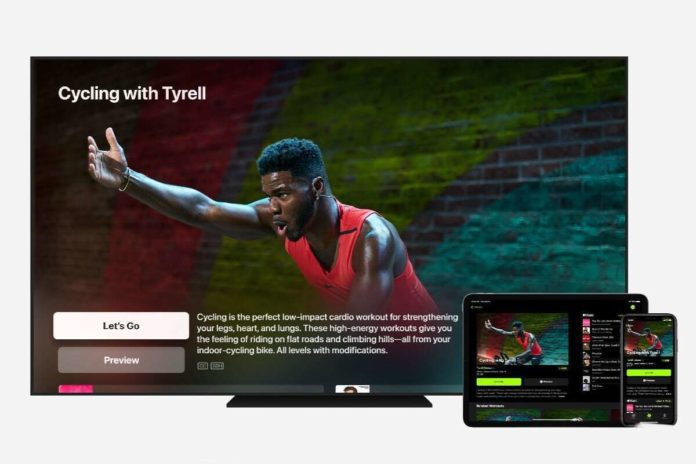 Apple Fitness+ is the company’s answer to online fitness services such as Peloton and Daily Burn, which have become very popular. Now Apple wants in on the business.

Announced Tuesday, the Fitness+ service combines your Apple devices, videos, and collected workout data. Fitness+ is part of the Fitness app for the iPhone. Apple will also bring the app to the iPad and Apple TV.

Fitness+ features a series of workout videos that users can play on an iPhone, iPad, or Apple TV. Along with the Fitness+ app, data is collected by the Apple Watch and displayed with the workout video, so you can track stats such as workout time, heart rate, and calories burned. A “Burn Bar” allows you to compare stats with other people who have done the same workout. You’ll also get notifications when you reach fitness goals.

Apple will offer 10 different workout types at launch, with new workouts added weekly. Fitness+ can make workout recommendations based on your past activity data collected by the Apple Watch. Filtering tools for workout type, trainers, duration, and music are provided so you can exercise the way you want. There’s also an “Absolute Beginner” program for users who are just getting started, or returning to regular workouts.

Fitness+ works with Apple Music, too. Your favorite workout music can be saved and used for future workouts, or listened to at your leisure.

Fitness+ requires an Apple Watch and is a subscription service that’s free for the first month. After that, you pay $9.99 per month, or $79.99 a year. A subscription can be shared with up to five people though Family Sharing. An Apple Music subscription is not required.

Fitness+ is also part of the new Apple One service bundle, where you can sign up for other Apple services, such as Apple Music, Apple TV+, and iCloud for a special price.

There are a few extended trial programs available:

The new service will be available later this fall in Australia, Canada, Ireland, New Zealand, the U.K., and the U.S.

Apple also announced a partnership with the government of Singapore on the LumiHealth initiative, a two-year program starting in October. LumiHealth has an app and works with the iPhone and Apple Watch “to encourage Singaporeans to keep healthy and complete wellness challenges through their Apple Watch and iPhone,” according to Apple.

How to properly log your devices out of iCloud