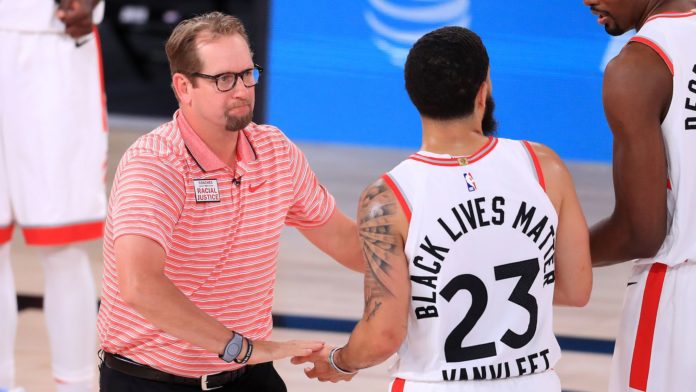 Terms of the deal were not disclosed for Nurse, who followed up the Raptors’ NBA championship-winning season in 2018-19 by guiding the club to a 53-19 mark and a franchise-record .736 winning percentage in 2019-20.

For his efforts, Nurse was named the NBA Coach of the Year.

“Our confidence in Nick just continues to grow, and part of that comes from what we’ve experienced together,” Raptors president Masai Ujiri said.

“The past two seasons have been unlike any other in our team’s history – first, winning our championship, and then navigating a global pandemic and committing long-term to the fight against racism and for social justice.

“Nick has proved that he can coach on the court and lead in life, and we’re looking forward to accomplishing great things in the future.”

Toronto reached the Eastern Conference semifinals for the fifth year in a row before falling in seven games to the Boston Celtics last week.

Nurse, 53, finished his second season as the Raptors head coach after five seasons as an assistant.

He was the ninth rookie head coach to win an NBA championship and has an overall 111-43 record with the team.

“My family and I will always be appreciative of Larry Tanenbaum and MLSE ownership for this opportunity. I’m grateful to Masai, Bobby (general manager Bobby Webster), and the players for their trust and their hard work,” Nurse said.

Nurse earned Eastern Conference Coach of the Month honours on three occasions and coached Team Giannis at the 2020 NBA All-Star Game in Chicago.