Home Lifestyle watchOS 7 FAQ: Everything you need to know about the new features... 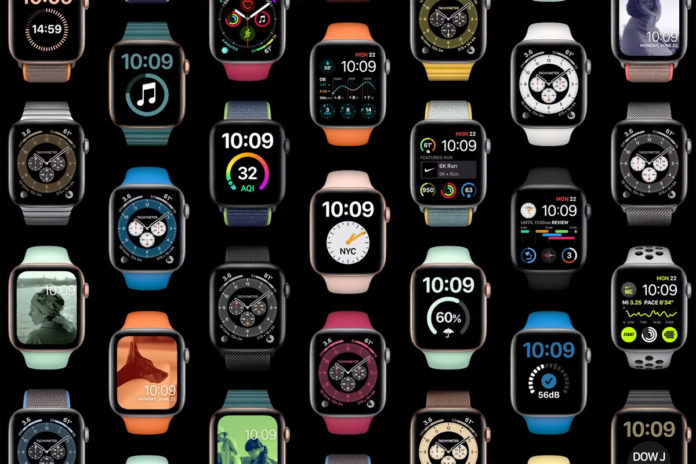 It’s not just the iPhone and the Mac that are getting sweet new features in the fall. There are really big changes in store for Apple Watch users, too. Here are the most important things to know about all the new features and functionality coming in watchOS 7.

Apple has announced that watchOS 7 will be released on September 16, 2020. Beta testers will get the final update a day earlier.

Check that your Apple Watch is supported and see how to download the update.

Apple hasn’t unveiled any new watch faces just yet—we assume those are coming with the Series 6 update likely due later this year—but there are major changes coming to the existing faces. You’ll be able to set more than one complication per app, so developers will be able to offer more than just a single option. For example, a weather app could offer complications for temperature, conditions, UV index, and wind speed, which would all be available on the same face.

To get things started, Apple has added a couple of new complications of its own, including a tachymeter on the Chronograph Pro and a single giant complication on the minimal X-Large face. We expect more will be added before watchOS 7 launches in the fall.

Apple still isn’t allowing for custom faces, but we’re getting the next best thing in watchOS 7: watch face sharing. You’ll now be able to share your favorite faces—complete with all of your complications and color choices—with your friends, either directly or through social media. Developers will be able to offer specialized faces based on their own apps that you can download right to your watch.

If there’s one feature we’ve wanted since the days of the original solid-gold Apple Watch, it’s sleep tracking. And we’re finally getting it in watchOS 7. Sleep tracking is part of a larger focus on sleep health in iOS 14 that works with your iPhone to develop habits that will help you sleep longer.

Sleep tracking on watchOS 7 is part of the iPhone’s new Sleep Mode, which will limit access to chosen apps so you can begin preparing for sleep. Once your set bedtime is reached, your Apple Watch will enter Do Not Disturb mode and the screen will no longer wake when raised or tapped. Additionally, a new Wind Down feature assists you in establishing a bedtime routine with shortcuts that help you relax, such as opening a meditation app or dimming your Hue lights. It’ll even play a short lullaby when it is time for bed, and haptics when you want to wake up.

In addition to helping you get to sleep and wake up, watchOS 7 will also keep track of how much you sleep. Each morning you’ll get a chart showing your time in bed and your time asleep, and your watch will offer charging reminders both before you go to sleep and after you wake up, in case your levels are too low. You’ll also see weekly and monthly trends, and heart-rate data to get a complete picture of your sleep health.

Apple is bringing four new workouts to the Fitness app on the Apple Watch. Functional strength training and core training are for hardcore athletes; cooldown tracks your post-workout stretching regimen; and dance, which uses “advanced sensor fusion” to detect when just your arms or just your legs are moving, or when everything is grooving at once so it can deliver an accurate cardio reading. Apple is also renaming the Activity app in iOS to Fitness and giving it a cleaner interface.

Since the effects of the coronavirus pandemic will likely be felt for years to come, watchOS 7 is bringing automatic hand-washing detection to the Apple Watch by using the watch’s motion sensors, microphone, and on-device machine learning. When your watch detects that you’ve started washing, it’ll start a 20-second counter and gently chide you if you finish up too quickly. And so you don’t forget, your watch will even prompt you to wash up when you get home.

Building on the Noise app introduced in watchOS 6, Apple will now offer weekly listening summaries to show how long you’ve listened to high-decibel sounds. And you’ll get headphone audio notifications that will let you know if you’re listening to your tunes at dangerous levels. When total listening with headphones has reached 100 percent of the safe weekly listening amount—which is 80 decibels for about 40 hours per week according to the World Health Organization—your Apple Watch will send a notification letting you know that the volume has automatically been lowered to protect your hearing.

Apple’s assistant has a few new tricks up its sleeve in watchOS 7. When you ask it to say something in another language, it will use the speaker to say the word aloud. It also supports Siri shortcuts so you can easily run one from your wrist and dictation is now processed on your watch, so responses are quicker and more accurate.

Apple Watch is picking up cycling directions so you can follow the safest path when riding, along with route options that suggest different paths depending on how long you want your trip to be. It’ll also let you know if there’s any obstacles that require you to get off your bike and you can search along your route if you need a drink or a fill-up.

Which devices are supported?

How can I get watchOS 7?

When Apple releases watchOS 7 on September 16, it will begin sending out notifications with prompts to update your Apple Watch. But that can take days, and you don’t have to wait. To updates your watch yourself, follow one of these two methods:

1. Open the Watch app on your connected iPhone. Then tap General and Software Update. You’ll see the update there and can choose to install it.

2. On your Apple Watch itself, open the Settings app. Then tap General, then Software Update. You can download and install the update directly from your Watch.

Note that your Apple Watch will need to be connected to Wi-Fi, charged to at least 50%, and charging on its charge pad in order to finish installing the update.