Home World Why are some Chinese shoppers superstitious about second-hand clothes? 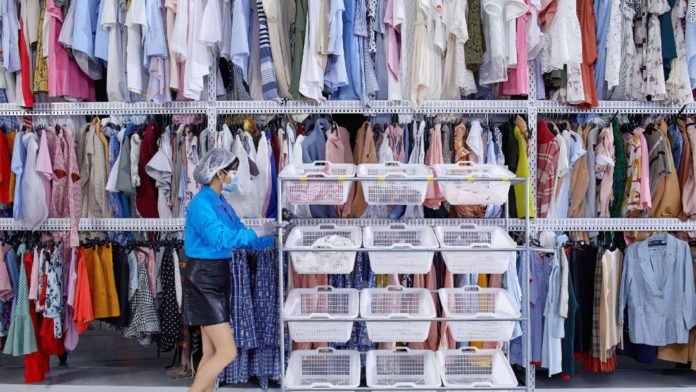 China may produce and consume more apparel than anywhere else in the world, but when it comes to buying pre-owned clothes, the country lags behind fashion’s other major players.

While second-hand platforms like The RealReal, ThredUp and Depop have taken off in the West, helping shoppers reduce their carbon footprint, the Chinese resale market been somewhat stunted by fears over counterfeiting, the ongoing social status attached to new goods and even superstitions around wearing other people’s clothes.

McKinsey’s authoritative annual The State of Fashion report, produced in partnership with The Business of Fashion in 2019, heralded the “end of ownership,” with consumers around the world seeking “both affordability and a move away from the permanent ownership of clothing.” The report partly attributes this trend to the younger generations’ “hunger for newness, while embracing sustainability.”
Rental and pre-owned retail services offer ways for shoppers to keep their wardrobes varied. And big luxury groups also want their piece of the pie, with groups like Richemont acquiring resale platforms in order to exert greater control of their goods on the secondary market. In the globe’s most populous country, however, appetite for second-hand clothing remains lackluster.

This could be a matter of positioning, according to fashion influencer Xie Xinyan, who has over a million followers on Weibo where she posts about makeup and vintage clothing, among much else. Low-end thrift stores may be rare in China, but the 24-year-old has witnessed a significant jump in the number of higher-end outlets marketing themselves as “vintage.”

When Xie began taking an interest in vintage clothing as a student in Nanjing, there were “barely any” vintage stores outside megacities like Beijing and Guangzhou, she said in a phone interview. In the past seven or eight years, however, they have become increasingly popular she said, adding that “in every major Chinese town there are at least one or two vintage clothing shops.”

Xie attributes some of this growing interest to the influence of Japanese vintage culture. “The Japanese started to embrace the concept of vintage clothing ahead of the Chinese,” she said. “China learned about it from them and through gradual cultural exchange. Some people started bringing items from Japan to China, and then more and more people started to adopt the style.”

While Xie believes that superstition no longer plays a significant role in people’s reluctance to shop second-hand, preowned clothes have traditionally been seen as inauspicious in China. There is additional taboo surrounding clothes worn by people who may have since died, as according to traditional Chinese custom, the deceased’s clothing should be burned so the garments can reach them in the afterlife (though the practice has been prohibited in certain places, due to pollution concerns.)

Instead, Xie said, people are now “mostly worried about hygiene.”

“My parents always questioned why I bought vintage clothes, because they’re not cheap at all — you could buy something new with the money you spend on a vintage piece,” she said. My mom would always ask why I didn’t buy new items that were more ‘clean and hygienic.'”

Calculating Chinese fashion’s environmental impact can be difficult, as it raises questions over whether responsibility for emissions lands at the door of producers or consumers. Nevertheless, as the largest player in an industry accounting for 20% of the world’s wastewater and 10% of all carbon emissions — more than global air travel and shipping combined — Chinese consumers’ demand for fashion leaves a significant footprint.
Not everything ends up in landfill. In 2018, China was the world’s fourth largest exporter of used clothing, with the majority of its $311 million haul being shipped to Africa, where it is sold on in markets and elsewhere. (Kenya alone consumed 20% of the country’s used garment exports, according to UN trade data.) But by way of return, China imported less than $2 million’s worth of second-hand clothes, mostly from the US, South Korea and other developed countries.

Louis Vuitton luxury bags sit on shelves in the live-streaming room at Ponhu Luxury, one of a growing number of second-hand luxury goods platforms in China. Credit: Giulia Marchi/Bloomberg/Getty Images

Nonetheless, start-ups and tech giants alike sense the potential market for resale. Transactions on Alibaba’s Idle Fish, a second-hand online marketplace for everything from clothing to electronics, reached 100 billion yuan ($14 billion) last year. And a number of fashion-focused platforms like Plum and Secoo have also emerged in recent years, in addition to individual vendors now selling second-hand goods via live-streaming apps like Douyi.
But it remains a comparatively embryonic market. While a 2019 report by Boston Consulting Group (BCG) predicted that preowned goods will account for 9% of all luxury sales globally by 2021, they make up just 2% of the country’s luxury goods transactions in China, according to a resale industry report cited in the country’s state media. China’s preowned luxury market may be “emerging steadily,” the BCG report noted, but it is “not yet well structured and no large players have appeared.”

Hoping to change that is Austin Zhu, who co-founded the consignment platform Zhi Er (which translates to “Only Two”) in 2016. Billing itself as China’s equivalent to The RealReal, the company photographs luxury items at its Shanghai warehouse before listing them on its platform and taking a 15% cut on each sale.

“Italian brands are the most popular on our platform,” Zhu said on a video call. “But US brands like Coach and Michael Kors are also very popular because the price is much lower than European brands.”

Verifying that products are real is one of Zhi Er’s most important services, Zhu said — perhaps unsurprising in a country with a significant trade in counterfeits. In 2016, the Chinese luxury goods authentication service Yishepai found that 40% of the items it appraised were fakes, according to Tencent’s QQ news service.

Being able to trust expensive and high-quality goods is the “first step in Chinese people accepting the idea of buying second-hand,” said Zhu. “It may be that, later, we have (cheaper) clothing categories, like how ThredUp in the United States also has Zara and H&M, but that’s the second step in China.

“In our first year, we also tried focusing on those fast-fashion brands, but we changed (direction),” he added, saying that there simply wasn’t enough demand for low-priced goods to make the strategy viable.

For now, clothing makes up just 15% of the sales made on Zhi Er, with handbags and accessories responsible for the bulk of purchases, Zhu said. BCG meanwhile found that clothing made up just 9% of luxury second-hand purchases in China in 2018, compared to 20% in France and Germany and 17% in the US. (The same report said that Chinese luxury consumers were more than five times as interested in selling luxury goods as they were buying them).

Just as resale platforms in the West are powered by Generation-Z and millennial consumers, China’s upwardly mobile “balinghou” and “jiulinghou” (the post-80s and -90s generations) appear to be driving the luxury resale market. The clothing rental sector is also targeting these younger consumers, said Liu Mengyuan, founder and CEO of Beijing-based subscription service YCloset.

Founded in 2015 and now reporting more than 15 million users, YCloset, allows subscribers to rent up to five items of clothing or accessories a month. After trying them out, users — who pay a flat subscription charge of 499 yuan ($72) a month — then have the opportunity to buy the items outright or simply return them.

A scene from YCloset’s facility where luxury items are cleaned and prepared for rental. Credit: YCloset

As well as helping reduce the consumption of new items, Liu said that YCloset uses canvas bags, not plastic ones, to send and receive clothing — and that 80% of the water used to clean its garments is recycled. But environmental concerns are not among her customers’ top priorities.

“I think there are three reasons why our users choose to rent,” Liu said in a phone interview. “One, increasing the diversity of their clothing choices; two, sparing them from the trouble of packing clothes (when moving or traveling); and three, freeing up space in their wardrobes.”

In some Western markets, there is evidence to suggest that consumers of rental and second-hand goods are, at least partly, motivated by environmental worries. Research carried out on behalf of the French pre-owned fashion platform, Vestiaire Collective, found that more than 70% of people using the service “try to shop ethically,” with 57% of those people saying that environmental impact was their biggest concern.

While Zhu does not have comparative data for Zhi Er, he is candid about his customers’ main incentive: affordability. Items typically sell on the platform for 10% to 30% cheaper than their original retail price.

“I think people have concerns about the environment, but I don’t think it’s the main reason people use resale apps or look to the second-hand market,” he said.

Zhu, who said the number of transactions on his platform is growing 25% to 30% a month, also believes that Covid-19 may serve to further grow the second-hand market. As well as reducing people’s ability to fork out on brand new items, the pandemic is also disrupting supply chains, delaying shipping and limiting travel — which matters when just 27% of Chinese luxury spending takes place on the mainland, according to consultancy group Bain & Company (shoppers often head to boutiques in Europe, the US or Hong Kong, where prices are cheaper and taxes more favorable).

“Coronavirus means that it’s not that easy for people to get what they want,” Zhu said, adding: “It’s getting harder and harder to buy branded stuff overseas, so people are trying to find a way (to do so) in mainland China — and the second-hand market is one of the best options for those people.”

Shoppers’ incentives for buying second-hand items is, arguably, immaterial, if the net result is the reduced production and demand for new clothing. Nonetheless, fashion influencer Xie is more upbeat about vintage shoppers’ — and her own — motivations.

“One of the key reasons why people wear vintage clothing is because it’s recycled and environmentally friendly,” she said. “When I was younger, I would never think about a clothing’s longevity. It was only about style. But now I think of how much wear I can get out of a piece before buying it.”