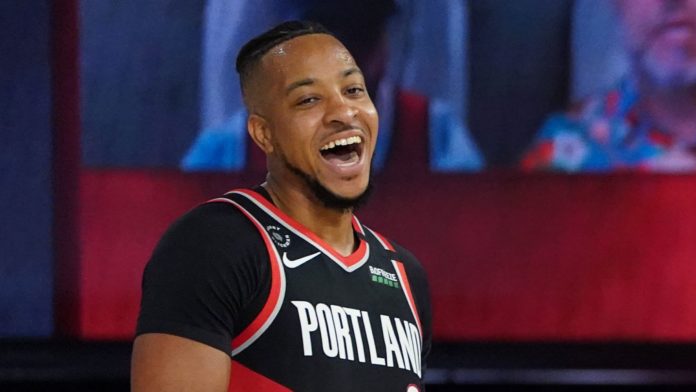 Portland Trail Blazers duo CJ McCollum and Damian Lillard have mocked the LA Clippers on social media, following their shock NBA playoff exit at the hands of the Denver Nuggets.

Clippers guards Pat Beverley and Paul George mocked Lillard on the sidelines after he missed two free throws late in a seeding game between the two teams in August, before the spat later spilled onto social media.

After Lillard called the Clippers “chumps” and reminded George of his previous playoff success over him, Beverley commented “Cancun on 3”, implying the Blazers, who eventually reached the playoffs before losing in the opening round to the Los Angeles Lakers, would soon be heading to Mexico for a holiday once they were eliminated.

After the Nuggets completed a stunning comeback from 3-1 down on Tuesday night to set up a Western Conference Finals match-up with the Lakers, it became clear the Blazers had not forgotten last month’s incident.

My last tweet before I finish this glass. They did vote they ain’t wanna play no more. . . But I didn’t think they was gonna go out like that 😂

Reacting after the game, McCollum, referring to another popular Mexican holiday location, wrote on Twitter: “Yoooo @Dame_Lillard you got an extra villa available in Cabo?

“If they fly private they can get into Mexico for sure. Should probably get the big jet.

“They did vote they ain’t wanna play no more… but I didn’t think they was gonna go out like that.”

Lillard then joined in the fun, sending a tweet directly to Beverley.

“@patbev21 I guess I should extend this Cancun invite since I haven’t made my arrangements yet.”

George and fellow Clippers All-Star Kawhi Leonard both struggled in Tuesday’s defeat, with 14 and 10 points respectively, while Beverley added 11.

Jamal Murray led the Nuggets with 40 points, while Nikola Jokic completed a monster triple-double to seal what was ultimately a comfortable 104-89 victory.

The Clippers, who pulled off a blockbuster trade last summer to unite George and free-agent signing Leonard, had been considered by many as the favourites to win this season’s championship.

The playoffs are being played in a bubble at the Disney World resort in Orlando, after the season resumed in July following a four-month delay caused by the coronavirus pandemic.