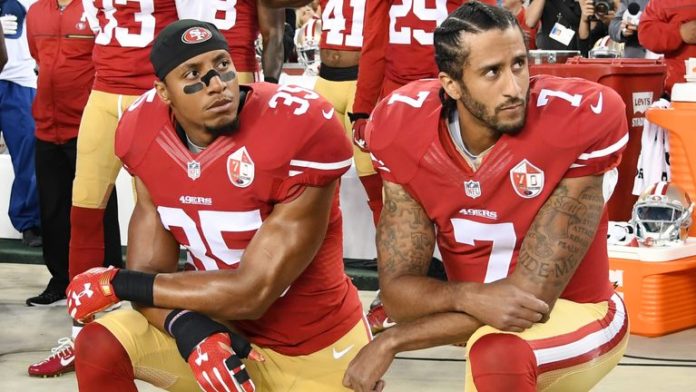 Baker posted: “Im all good with opposing fans talking trash. But This right here man… All you can do is prayfor ppl like this”

The San Francisco 49ers have publicly condemned racist messages sent to Arizona Cardinals safety Budda Baker and said they are trying to identify the person so they can ban them from future games and events.

On Monday, Baker posted a screenshot of what appeared to be Instagram direct messages sent from the handle “niners8” to Baker, calling the two-time Pro Bowl selection a variety of racial slurs.

When he posted the screengrab on Twitter, Baker wrote: “Im all good with opposing fans talking trash. But This right here man… All you can do is prayfor ppl like this.”

The 49s took to social media to issue their response to the incident.

Statement from the San Francisco 49ers.

There is no place for hate and we got your back @buddabaker32 ❤️ pic.twitter.com/lq6ilmMDRt

“The San Francisco 49ers unequivocally denounce the racist messages sent to Budda Baker,” a statement read. “The individual who sent the messages does not represent the 49ers or the Faithful. Per team policy, we are working to identify this person and will ban them from all 49ers games and events. Incidents like this demonstrate how much work remains to be done to address racism and hate in our society. We remain steadfast in our commitment to that work.”

49ers CEO Jed York added, via his own Twitter account: “Sadly, these incidents occur far too often. Permitting these individuals to go unchecked allows racism and hate to spread. I urge other teams in the world of sport to consider our policy of banning those who seek to tear others down with racial slurs and threats of violence.”

Colin Kaepernick has hit out at the NFL, claiming the league are “blackballing” his former 49ers team-mate Eric Reid, and accusing them of running “propaganda about how they care about Black Life”.

Kaepernick and Reid participated in protests during the playing of the national anthem before NFL games to highlight social awareness and racial injustice in 2016.

The pair have both previously filed a grievance letter with the NFL, alleging team owners and the league colluded to prevent their employment due to the protest activities.

NFL Week One games saw teams widely supported in making a stand, with some remaining on the field, some taking a knee, and others choosing to remain in the locker room.

‘Lift Every Voice and Sing’ – often referred to as the Black national anthem – was played before all of the games, while the playing of ‘Star Spangled Banner’ followed just before kick-off.