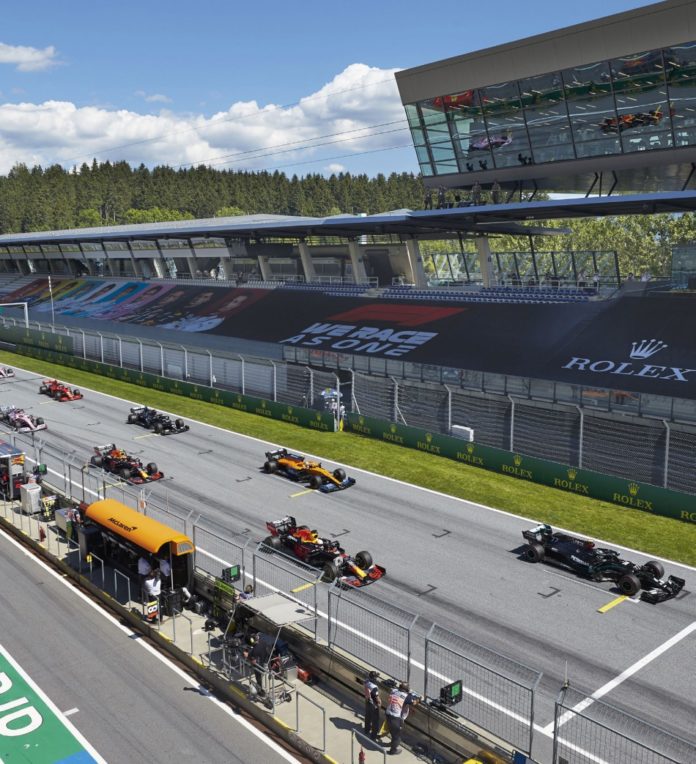 When Carlos Sainz steered his McLaren MCL35 out of his team’s garage at Spielberg’s Red Bull Ring and past the light cluster that had just flashed green at the end of the pitlane to open the first practice session for the 2020 Austrian Grand Prix, it marked a moment of triumph for Formula 1. and for global motor sport.

Three months earlier, the top level of motor sport’s plans for its most ambitious season yet – a globe-spanning 22-race campaign that added GPs in Vietnam and the Netherlands – were thrown into disarray when the opening round in Australia fell victim to the growing COVID-19 crisis.

Following the cancellation of the race in Melbourne, Formula 1 itself went into crisis mode, as over the following weeks the first nine races of the planned schedule were either indefinitely postponed or cancelled. The FIA, in consultation with F1 and its teams, introduced a series of measures designed to limit the damage caused by the decimation of competition. The Technical Regulations due to take effect from the 2021. season were postponed until 2022. Chassis would be carried over from 2020 to ’21. and component upgrades were frozen.

While the immediate concern was to safeguard the sport, parallel work also began to plan for a restart as soon as conditions permitted.

As detailed in the previous pages, the first hurdle was developing a strategy to allow ‘mass-gathering’ events to take place, and within three months of the cancellation of Australia the FIA published its Return to Motorsport Guidelines, a comprehensive 81-page handbook designed to enable motor sport organisers to stage events in a safe and secure environment.

In advance of the guidelines’ publication, Formula 1 pressed ahead with its plans for the first eight events of a heavily-revised 2020 season, and on May 30  its proposed schedule received a massive boost in the shape of approval by the health authorities for a season- opening pair of behind-closed-doors races to be held in early July at the Red Bull Ring in Austria’s largely rural Styria region.

“As well as strict hygiene measures, the concept foresees regular testing and health checks for the teams and all of the other employees, and also a concrete medical concept,” said Austrian Health Minister Rudolf Anschober in a statement. “For the Ministry of Health, and following a detailed review by in-house experts, the concept meets the requirements for preventing the spread of the Coronavirus. The decisive factor is the close coordination between the organiser and the regional and local health authorities.”

RISING TO THE CHALLENGE

The sport quickly announced that the double-header in Austria would be followed by a trip to nearby Budapest for the Hungarian Grand Prix and then by a brace of races at Britain’s Silverstone Circuit and a standalone Spanish Grand Prix in Barcelona.

“What the [pandemic] created was a sense of urgency,” says F1 CEO Chase Carey. “Crises in many ways require a sense of urgency. The issues that arose within the timeframe gave us the impetus; it gave us the momentum to tackle things that would have probably been tackled in the ordinary course over a longer timeframe. It really shows the spirit of the sport… When things got tough they rose to the occasion.”

The next step was to codify the protocols stakeholders would need to adhere to at such events and at the June 19 meeting of the FIA World Motorsport Council Appendix S, a COVID-19 Code of Conduct, was added to the Federation’s International Sporting Code.

With F1’s logistical juggernaut now running at full speed, a single test remained: would the protocols prove robust enough to withstand motor sport’s first major test of the restart? Dr Pau Mota, FIA Head of Medical and Rescue, explained that the Federation was in contact with local health authorities in all of the proposed race locations from early on.

“We set up weekly meetings with Public Health Officers from Austria, Hungary, Silverstone, and Barcelona from the end of May,” he says. “It’s close work with the testing company, Public Health Officers, and the COVID-19 staff from the FIA to ensure that any suspected case, uncertain case, or positive case is managed in a legal and transparent way.”

Chief among the protocols put in place for the new season was a strict test regime that required all personnel attending the event in Austria to return a negative COVID-19  test within 96 hours of arriving at the circuit. Once there, personnel were also required to undergo tests every five days, a regime operated in conjunction with scientific testing partner Eurofins, which has more than 48,000 staff across a network of more than 900 independent companies in over 50 countries, and which operates more than 800 laboratories. “Having the same test provider for the whole season, where they can provide a global agreement for anywhere, enables us to have a common database,” says Mota. The testing protocol was also matched by temperature checks at circuit entrance points, the mandatory use of Personal Protective Equipment, such as masks, within the circuit and thorough hygiene recommendations for all personnel at the event.

Also key to the security of the event was the segregation of personnel into team and stakeholder groups, and then into further sub-groups in order to minimise the risk of transmission and to confine any positive cases within a limited circle that could be effectively tracked and contained. Groups were restricted to specific areas – for example garages in the case of teams – with the result that interaction between groups was drastically reduced. In the case of tyre supplier Pirelli, the strict guidelines meant that when delivering the tyres to each team garage their representatives were required to wear full PPE to be compliant. Each race team would be restricted to 80 employees per race, down from anything up to 200 at a normal race. Additionally, teams would only be allowed to have 40 personnel on the grid.

The new protocols extended to officiating at the event, with the FIA putting in place a remote stewarding facility whereby an o.-site steward would have access to the same tools as on-site officials and could take over should one of the stewards at the event be forced to withdraw.

“The target we worked to in Austria was 2,000 people on-event,” says Formula 1 Race Director Michael Masi. “Within that number I believe we had 57 individual groups over the entire venue. The number of sub-groups within that was in the hundreds”.

The protocols and the high levels of compliance meant that In the days leading up to Saturday’s qualifying session, 4,032 drivers, team members and personnel were tested for COVID-19. Not a single test came back positive.

“It’s really incredible,” says FIA Medical Commission President, Professor Gérard Saillant. “If you had told me that would be the case three months ago, I would not have believed you. But everybody was very involved in this challenge, from the FIA, to Formula 1, the teams and the staff, and our responsibility was very well understood by them.”

The following races, in Austria and Hungary, further tested the robustness of the new protocols, with two people testing positive in Hungary and, at the British Grand Prix, the championship facing its first high-profile positive case in the shape of Racing Point driver Sergio Pérez. However, following swift isolation, thorough track and trace initiatives and strict compliance with local health measures, both events progressed smoothly. Pérez made a full recovery and returned to Formula 1 action in Hungary.

Over the first six races of the season, more than 30,000 tests were completed with a total of just four positive tests returned. For FIA Chief Operating Officer Bruno Famin it’s testament to the strength of the protocols established by the Federation.

“We have increased a lot the resilience of the system,” he says. “This has been achieved, firstly, through testing. By having everyone tested before entering the venue and putting in place a very strict testing plan on site, we can detect any possible case very quickly. Additionally, the FIA’s COVID-19 Code of Conduct has given the right information to teams and stakeholders to enable them to prepare very well. We are much better prepared. Of course, the protocols have an impact on the operational side, but the measures are in place to reduce the number of potential cases and, if there is a case, to reduce the impact on teams and stakeholders.”

Race Director Michael Masi agrees, adding: “We learned collectively. At the FIA and as a championship we’ve learned a great deal about the pandemic, and we are far stronger and better equipped than we were in Australia.”

The increased resilience of F1 to the threats posed by the pandemic has been borne out in the success of the first six events – with a focus on competition rather than Coronavirus protocols – and the expansion of the calendar, which now numbers 13 events thanks to the addition of races at Belgium’s Spa-Francorchamps, Monza and Mugello in Italy, confirmation of a Russian Grand Prix and races in Germany at the Nürburgring, Portugal’s Portimão circuit, as well as a third Italian race at Imola. The sport is also targeting a return to Turkey’s Istanbul Park for the first time since 2011 and events in Bahrain and Abu Dhabi.

The coming months remain uncertain, however, as the course of the pandemic continues to ebb and flow in countries around the world. And for Professor Saillant, the unpredictable nature of the crisis means vigilance must be maintained. “We have a robust action plan,” he says, “but we must be flexible and reactive based on experience.”

It’s an outlook echoed by FIA President Jean Todt. “Formula 1 has been a global example again of motivation, of engagement to restart racing,” he says. “But we must be respectful of the Code of Conduct, we have to be careful.”

Formula 1 has made a remarkable return but the fight to stay safe continues.