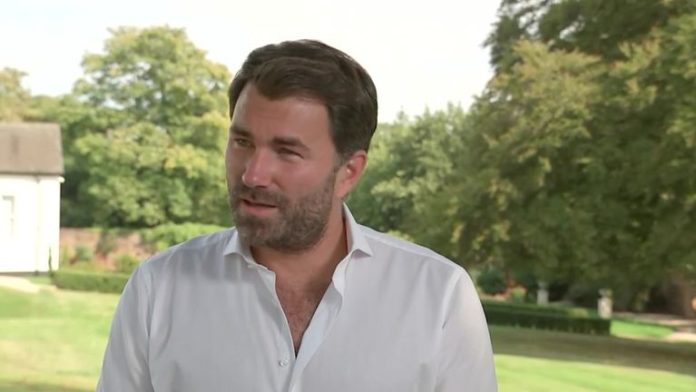 “If I’m a betting man, I’m having a little cheeky each way punt that Usyk-Chisora gets over the line”

By Richard Damerell and Jeremy Langdon

Financial obstacles for Oleksandr Usyk vs Derek Chisora are close to being resolved, with the heavyweights eager to discuss a solution, says promoter Eddie Hearn.

Usyk was originally set to face Chisora in May, a date cancelled due to the coronavirus outbreak, and restrictions for crowd attendances have complicated plans to reschedule the fight.

But Hearn had hoped to stage Usyk-Chisora on October 31, and the Matchroom Boxing boss is optimistic that revised terms can be agreed.

“We’re close,” Hearn told Sky Sports. “I mean both guys understand that without a gate at The O2, there’s significantly less revenue driven to that show, but both guys fancy that fight.

Dance, Exercise, and look forward to the fight with Derek 💪🏻 #usyk pic.twitter.com/EqsdQdXIvs

“But we are handcuffed and bound by the fact that no fans are allowed at the moment. But if I’m a betting man, I’m having a little cheeky each way punt that Usyk-Chisora gets over the line.”

Usyk has already lined up a mandatory shot at the WBO heavyweight belt which is held by Anthony Joshua, who is still expected to defend his unified titles against Kubrat Pulev in December.

But Alexander Krassyuk, co-promoter for Usyk, has warned that he will ‘enforce’ Joshua’s WBO title commitments to the Ukrainian star.

“Usyk has been the WBO mandatory challenger for more than one year,” Krassyuk told Sky Sports.

“He has agreed to let AJ versus Pulev happen, with regards that the winner fights him next. This statement is still solid.

“Our plan is A) beat Derek Chisora B) push AJ to comply with WBO rules or vacate the title C) defeat AJ (or any other WBO champion or contender and become the heavyweight champion. Simple and practical.”

Hearn has admitted that Usyk is a serious threat to plans for an undisputed fight between Joshua and WBC champion Tyson Fury in 2021.

“For sure, yes he’s not stepping aside,” said Hearn. “He wants the fight – the winner of Joshua against Pulev for the WBO world title.

“Maybe Mr Chisora puts a spanner in the works like Alexander Povetkin did. Anything could happen.

“Usyk believes he could go out, get a good win under his belt in the heavyweight division and then move on to challenge for a world title in 2021.”