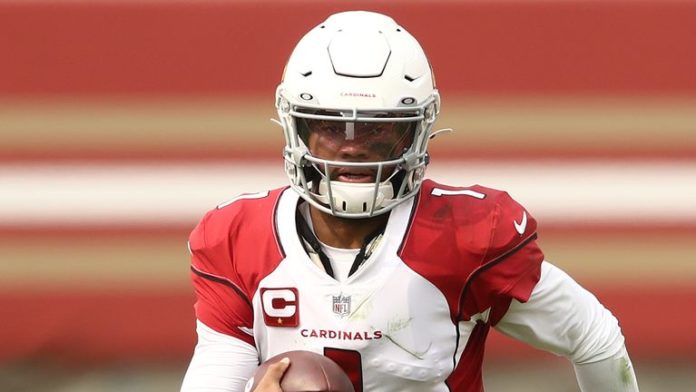 Murray, who was offered the chance to play baseball by the Oakland Athletics, went on to be drafted with the No 1 overall pick by Arizona last year and then claimed NFL rookie of the year honours.

The Cardinals are expected to improve on their 5-10-1 record this year, and got their season off to a fine start with a 24-20 win over the defending NFC champs, in which Murray threw for 230 and one TD, as well as adding 91 yards rushing and a further score.

Click on the video above to watch Coach Ryan give his assessment on Murray, along with Josh Denzel and Hannah Wilkes on our brand-new NFL Overtime show – on Sky Sports NFL, Tuesday nights, 9pm.

“He was outstanding,” said Ryan. “It’s the first time I’ve really got the chance to see the young man play and it was impressive.

“He can throw the ball; he has a little howitzer of an arm in quite a short body. And to watch him run; he ran the ball 13 times and only got tackled once!

“It’s hard to hit someone who is so fast. The type of athlete he is, being a first-round pick for Major League Baseball and in the NFL, is really impressive.

“He is so hard to defend. You can account for everybody but, when the quarterback runs – in traditional football you normally don’t have to account for him – it’s a whole new ball game now with these athletes playing quarterback.

“It’s pretty obvious that this is the way the future of the game is going; defensive coordinators are going to have their hands full, they really are.

“The weird things is, as a defensive back – Shaun Gayle said this – you struggle to break on the football because you never see it thrown.

“When he [Murray] is coming out of the well, you don’t see him, so when he throws it, you’re a step late on the break.

“His escapability – to buy extra time and get the ball down the field to the likes of DeAndre Hopkins and Larry Fitzgerald – it’s such an advantage when you’ve got his arm talent to go with it; he’s going to be hard to stop.”

Sanu’s agent Mike McCartney said on Tuesday that an agreement has been reached to reunite Sanu with 49ers coach Kyle Shanahan, who was offensive coordinator for the Atlanta Falcons with Sanu in 2016.

The Niners are banged up at receiver after placing Deebo Samuel on injured reserve last week with a broken foot. Rookie Brandon Aiyuk is working his way back from a hamstring injury, Richie James Jr hurt his hamstring in the season-opening loss to the Arizona Cardinals and All-Pro tight end George Kittle also sprained his knee.

New Orleans Saints have been rocked by the news that star wide receiver Michael Thomas could be facing an extended period out of action.

Thomas suffered an injury in Sunday’s season-opening 34-23 win over Tampa Bay Buccaneers and initial reports had suggested he intended to play through a high ankle sprain.

NFL Network’s Tom Pelissero and Ian Rapoport reported on Tuesday that Thomas’ injury is ‘worse than originally believed’ and that the fear now is that the two-time All-Pro could now be sidelined for an extended period.