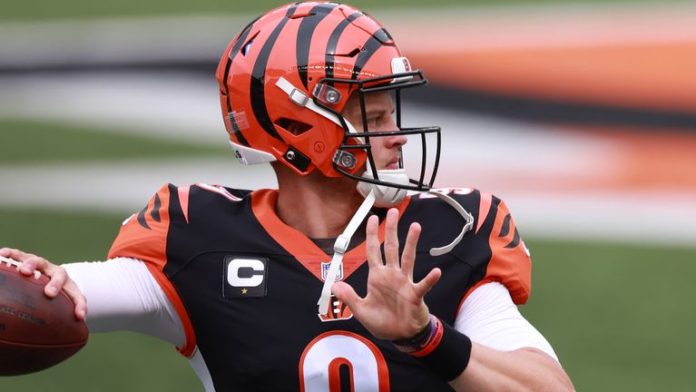 Watch OBJ take on Burrow as the Browns host the Bengals on Thursday night, live on Sky Sports NFL from 12.30am

Beckham played for the LSU Tigers from 2011-13, reaching the BCS National Championship game in his freshman season, only to lose to Alabama 21-0.

Burrow, in arguably one of the greatest collegiate seasons of all time – 5,671 yards passing, 60 touchdowns and only six interceptions – took the Tigers to a 15-0 record on their way to defeating Clemson 42-25 in the Championship game in January.

Burrow’s play saw him selected with the No 1 overall pick by the Bengals in the 2020 NFL Draft, and Beckham is looking forward to facing the young QB with the Browns on Thursday Night Football – live on Sky Sports NFL from 12.30am.

“He is the GOAT,” Beckham told reporters playfully. “He won the championship for us.

“That was tremendous to be able to see, as I was there, and the years before leading up, I felt like LSU always had the best of teams but just could not find a way to put those pieces together.

“I think he soothed a lot of pain that a lot of us players had felt. He is forever a legend.

“I’m happy to see him in the NFL now. I obviously did not get to watch his first game, but heard that he did pretty well so I am wishing him the best of luck in his career.

“I obviously do not want him to beat us, but anywhere else or any other game he plays, I am always rooting for him.”

Browns quarterback Baker Mayfield – a fellow former No 1 draft pick [2018] – too talked up Burrow ahead of Thursday night’s clash, saying he thinks the rookie is “an unbelievably talented guy”.

“From the games that I saw him play last year, very decisive,” said Mayfield. “He gets the ball out and gives his guys a chance.

“I did not see them play the Chargers on offense, but he’s real smooth, kind of looks like a field general back there.

“Obviously, I think he is an unbelievably talented guy, but I think his teammates love him and they really fight for him. That is what you can tell on TV.”

‘Burrow has got the goods’

Burrow completed 23 of 36 passes for 193 yards, with one interception on his NFL debut as the Bengals lost a tight one to the Los Angeles Chargers 16-13 on Sunday, but Good Morning Football‘s Kyle Brandt and Nate Burleson liked what they saw.

“I loved what Burrow did,” Brandt said. “They lost at home, they did not score many points, it wasn’t pretty, you’d think we should be jumping on him, but I loved it.

“You know why I loved it? Just give me one throw. There are going to be mistakes, it’s going to be ugly, he’s going to miss guys – I don’t even care about any of that.

“The one throw, at the end of the game – with the game on the line – he made a ‘money’ throw to A.J. Green [not called as a touchdown due to pass interference] and that validated the pick right there.

“That’s a game-winning touchdown; it’s almost like Burrow did win it, but the Chargers had a veteran cornerback who sold the pass interference.

“And, if you didn’t watch that game, [Joey] Bosa and [Melvin] Ingram hit him all day – he got tossed around – and yet he still chucked the ball around. I was really impressed, even in a loss.”

Burleson added: “I love everything about this young man. I know I get really excited when I talk about these young players, but he just has it.

“This dude is a rookie and was named a captain of a team that has a load of veterans. He has got the goods.”

“He was outstanding,” said Ryan. “It’s the first time I’ve really got the chance to see the young man play and it was impressive.

“He can throw the ball; he has a little howitzer of an arm in quite a short body. And to watch him run; he ran the ball 13 times and only got tackled once!”

Click on the video above to watch Coach Ryan give his assessment on Murray, along with Josh Denzel and Hannah Wilkes on our brand-new NFL Overtime show – on Sky Sports NFL, Tuesday nights, 9pm.

Garafolo cited undisclosed sources for the news on Sherman, adding that the All-Pro cornerback is said to be nursing a leg injury and is likely to be sidelined for at least three weeks.

Sherman did not appear to be hampered by an injury on Sunday and played 78 of 82 snaps during the 49ers’ 24-20 season-opening loss to the Arizona Cardinals.

The 49ers have agreed to a one-year contract with free agent wide receiver Mohamed Sanu.

Sanu’s agent Mike McCartney said on Tuesday that an agreement has been reached to reunite Sanu with 49ers coach Kyle Shanahan, who was offensive coordinator for the Atlanta Falcons with Sanu in 2016.

The Niners are banged up at receiver after placing Deebo Samuel on injured reserve last week with a broken foot. Rookie Brandon Aiyuk is working his way back from a hamstring injury, Richie James Jr hurt his hamstring in the season-opening loss to the Arizona Cardinals and All-Pro tight end George Kittle also sprained his knee.