Home Culture ‘The Devil All the Time’ strands its super-star cast in a grim... 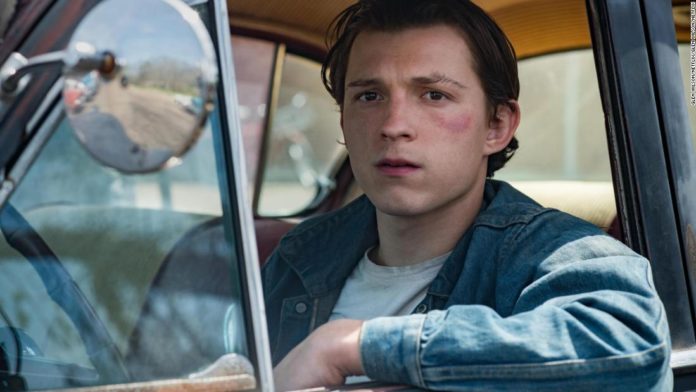 Pollock actually serves as the movie’s (frequently used) narrator, and he’s a folksy natural, adding literary authenticity to director Antonio Campos’ film. Yet other than attracting an inordinately good lineup of players — many in relatively minor roles — the dutiful nature of the adaptation drains much of the life out of the movie.
Simply put, “The Devil All the Time” has the texture of a Coen brothers film, with a dash of “L.A. Confidential” in terms of the music and period. But despite its vivid rendition of the era and a small town with secrets like Knockemstiff, Ohio, it lacks the wit of those movies, and shifts around so much it’s easy to become restless waiting for the lines to intersect.
Indeed, those drawn by the aforementioned super-stars should be forewarned neither appears till more of a third of the way through the movie, which begins in 1957, flashes back to a soldier returning home from World War II and, before it’s over, jumps ahead to the days of escalation in Vietnam, encompassing a roughly 20-year span.
Covering that kind of ground presents a daunting task, one that might have fared better stretched into a limited series. As is, the film essentially lurches from one character to the next, in a way that feels unavoidably episodic, and leaves some talented players — Haley Bennett and Mia Wasikowska among them — with little to do.
The early portion tilts toward the aforementioned soldier (Bill Skarsgard), whose grown-up son Arvin (Holland) winds up being raised along with a young girl (Eliza Scanlen) who has survived a separate tragedy.
Elsewhere, there’s a serial-killer couple (Jason Clarke and Riley Keough), who pick up hitchhikers and murder them; a corrupt sheriff (Sebastian Stan, another refugee from the Marvel universe), trying to get reelected; and a lascivious preacher (Pattinson), who shows up almost an hour into the movie, spouting sermons that merely illustrate his hypocrisy.
Arvin’s dad didn’t teach him much, but he did espouse justice in the form of vengeance. The character certainly offers a different side of Holland, who is among the few afforded any significant screen time to exhibit much in the way of compassion or humanity.
Of course, just assembling this cast represents a promotional coup for Netflix, likely to land the movie on its most-popular list, amid a push that involves scheduling high-profile features each week at a time when the theatrical business remains hobbled.
Feeling compelled (or at least motivated) to watch, however, isn’t the same thing as liking it. And with “The Devil All the Time,” the missteps reside in more than just the details.
“The Devil Next Time” premieres Sept. 16 on Netflix.