Home World This marine biologist wants to use the world’s toughest corals to save... 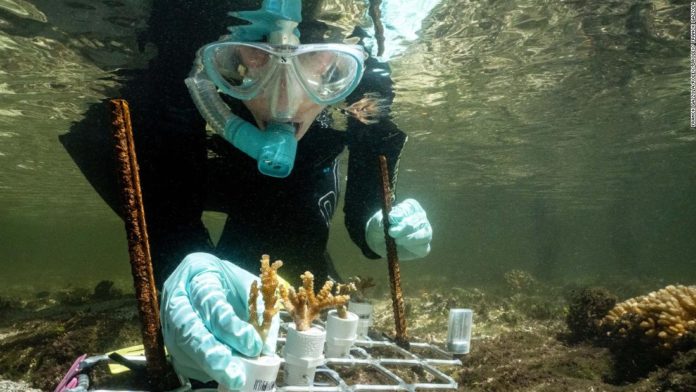 It was the first time she saw a coral reef — as a seven-year-old on holiday with her family in the Bahamas. It was also the moment Camp fell in love with the ocean. “It was just that fascination with this unknown world that really drew me in,” she recalls.
Now 33, the British-born marine biologist is a leading researcher of coral conservation and resilience at the University of Technology Sydney — fighting to save the marine wonders she was first captivated by as a child.
One of the most biodiverse ecosystems in the world, coral reefs support a quarter of the world’s marine life. But scientists fear climate change could wipe out all of Earth’s coral reefs by 2100.
While approximately half the world’s coral has been lost, Camp believes we can still save what is left.
Camp’s work involves searching the globe to find the world’s toughest and most resilient corals — the species with the best chance of surviving the climate crisis.
She has studied corals growing in mangrove lagoons across the world, including the Caribbean, Seychelles and Indonesia. In 2016, she and her team were the first to find mangrove corals in New Caledonia, in the south Pacific. In 2019, for the first time, they documented similar mangrove corals in their own backyard … on the perimeter of Australia’s Great Barrier Reef.
Mangrove lagoons are shallow bodies of water, found near coasts in the tropics, that are lined by trees and shrubs adapted to grow in salt water.
In the lagoons, “the water’s naturally warm, naturally acidic and has low oxygen conditions,” says Camp. On reefs, coral is dying as climate change makes ocean conditions similar, with warmer, more acidic water, and reduced oxygen levels — but in mangrove lagoons, corals thrive. Camp’s aim is to identify the special qualities that allow mangrove corals to survive in a hostile environment.
Camp and her team collect coral samples from mangrove lagoons, bring them back to her lab in Sydney and conduct DNA analysis to learn more about their genetic make up and how they differ from reef corals.
In Australia, Camp swaps fragments of coral between the mangrove lagoons and the main body of the reef.
Mangrove corals are transplanted onto the reef to test which species can flourish there, she says, while reef corals are moved to the mangrove habitats to assess how they react to a more challenging environment. Camp’s aim is to work out if scientists will one day be able to use these resilient corals to replenish areas on the reef degraded by climate change.
The operation is tightly controlled with the coral fragments attached to small frames with cable ties, to prevent them from spreading beyond the test area. This ensures there are no unintended consequences to moving species between different habitats.
Camp says she remains an “ocean optimist”, but ultimately, her work is just “buying time” against climate change.
“Time is running out and it is urgent,” she says. “If we don’t act, these critically important ecosystems … are going to be lost or at least severely degraded to a point where we actually can’t go back.”
Find out about more about Call to Earth and the extraordinary people working for a more sustainable future.