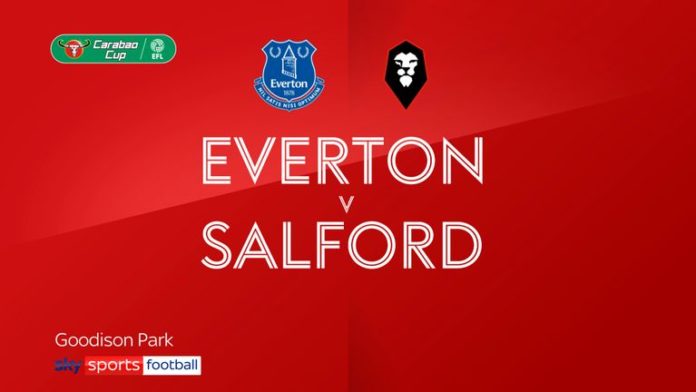 Everton avoided any worries of a Carabao Cup banana skin as their much-changed side beat Salford 3-0 to progress to round three.

Michael Keane nodded the Toffees ahead after eight minutes at Goodison Park from Gylfi Sigurdsson’s corner, but the hosts struggled to test visiting goalkeeper Vaclav Hladky enough before the break to ever truly threaten to add to their lead.

The summer arrival had to be at his best after the break, however, to save from Anthony Gordon and Theo Walcott, but could do nothing to deny Sigurdsson his 100th goal in English football when the Icelander fired home from Gordon’s cut-back.

The woodwork would then come to Salford’s rescue four times in the dying minutes as Sigurdsson again went close before Gordon struck the base of the post with a wonderful 25-yard curler, but when the young forward was brought down by Bruno Andrade with three minutes to go, Moise Kean kept his penalty just under the crossbar to secure Everton’s safe passage to round three.

There was still time for a Kean header to rattle the woodwork in the final minute before Gordon struck the crossbar from the rebound, but Everton’s progression was already well secure, with a visit to League One Fleetwood Town awaiting next up, live on Sky Sports on Wednesday, September 23.

The Toffees were unbeaten in 18 League Cup games against fourth-tier opposition, and showed little signs of upsetting that tally when Keane powered home a header from the first corner of the game, meeting Sigurdsson’s excellent delivery at the near post after shaking off Jason Lowe.

Salford were not too far from an instant equaliser two minutes later when Richie Towell connected well with a ball inside but arched his first-time effort from 25 yards into the arms of Joao Virginia.

Everton found themselves in full control for the majority of the opening period but saw the wind knocked out of their sails somewhat with an injury to Jarrad Braithwaite midway through the first half, and only tested Hladky again moments before the break when Bernard’s excellently struck curling drive was turned behind by the goalkeeper’s fingertips.

The second half was somewhat of a different affair. Kean should have doubled the lead four minutes after the restart but somehow nodded against the bar from Sigurdsson’s inviting deep delivery, before Bernard was similarly wasteful when firing a loose ball well wide under little pressure.

In a rare Salford attack, former Everton youth prospect Ibou Touray saw his cross nodded wide by Ian Henderson, before normal service was resumed as Gordon was denied by another smart Hladky save.

Everton made 10 changes from Sunday’s win at Tottenham, with only Michael Keane remaining from the starting line-up.

There were four changes for Salford including a recall for former Manchester United youngster James Wilson.

“It’s a point in the game where you could see the lower league team getting that little bit of confidence, but you could also see Everton getting a second goal,” said Salford co-owner and Sky Sports commentator Gary Neville with 20 minutes remaining, and so it proved within moments as another smart driving run from Gordon found space in the box to pick out Sigurdsson, who blasted home.

The impressive Niels Nkounkou found Walcott at the far post as Everton continued to push but Hladky was in familiarly fine form to claw his effort behind.

He could do little about two powerful efforts within a minute of one another which would follow, and was grateful to see the woodwork come to his rescue as first Sigurdsson and then Gordon lined up efforts from distance which both cannoned off the post and away to safety.

Andrade’s clumsy challenge on Gordon with three minutes to go gave the goalkeeper one job too many, however, as Kean stepped up from 12 yards to fire the resulting penalty into the top of the net.

There was still time for the Italian striker to miss another sitter from Sigurdsson’s cross, nodding against the post from close-range, before Gordon rattled the crossbar from a tight angle on the rebound.

It would have put a little more gloss on a strong performance from Carlo Ancelotti’s second-string side, but they had never looked in real danger of failing to wrap up a trip to Fleetwood in the next round.

Everton manager Carlo Ancelotti: “It was a good performance, the attitude of the team was good, we played a good game and it was our goal to move on and now we gave minutes to the players who didn’t play on Sunday, they did well.

“We have a good squad, we want to compete in every competition. It’s an important competition for us, of course it won’t be easy but we have to try, and do our best as usual.”

Salford boss Graham Alexander: “I thought we were excellent, the class showed with the goals and they made us work really hard, but I’m really proud of the players tonight; their discipline in our shape was excellent, we had opportunities ourselves too.”

Everton host West Brom in Saturday’s early Premier League kick-off at 12.30pm, while Salford travel to Grimsby later that day in League One at 3pm.