Home Sport How can Canelo return to the ring? 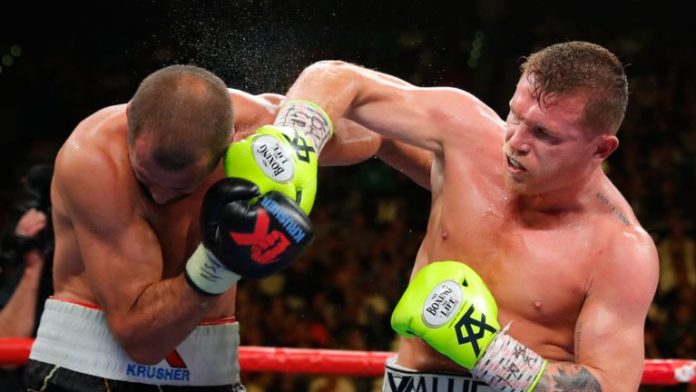 Eddie Hearn: “We want to see him back in the ring particularly because the two fights there for him are Smith and Saunders”

Saul ‘Canelo’ Alvarez’s legal dispute with his own promoter is “difficult” because of their long history together but his return to the ring “would elevate all of us”, according to Top Rank president Todd duBoef.

Canelo filed a lawsuit against Golden Boy Promotions and broadcaster DAZN after being unable to agree terms for his next fight – the Mexican boxer alleges a breach of contract and is seeking damages of at least $280m (£216m).

“I’m not scared of any opponent in the ring, and I’m not going to let failures of my broadcaster or promoters keep me out of the ring,” Canelo said.

Matchroom promoter Eddie Hearn told Sky Sports: “It’s always messy when a fighter and a promotional company end up in the courtroom. It’s nice to avoid it.

“We want to see him back in the ring particularly because the two fights there for him are Callum Smith and Billy Joe Saunders, two of our guys. I want them to have the opportunity to fight Canelo.

“Hopefully it gets resolved and we see Canelo back in the ring – he’s one of the biggest stars in world boxing and is a terrific fighter.

“I think the plan is still for Canelo to box in November, or at least this year.

“If he does, I’ve got my fingers crossed they pick Callum or Billy.

“If they don’t, they should fight each other. But if there’s no fans, how do you do Smith vs Saunders?

“Right now it’s about keeping the fighters active but also recognising some fighters are better for 2021.”

WBA super-middleweight champion Smith’s trainer Joe Gallagher told Sky Sports: “I wanted Smith out in October. I want him out in November. There is a cut-off point. There are fights there, and (IBF champion) Caleb Plant is a very good fight for him.”

WBO super-middleweight champion Saunders tweeted: “Looks like the big one won’t be happening Alvarez but still [Demetrius Andrade] or Callum Smith should be made for November.”

But all eyes in the middleweight or super-middleweight division remain on Canelo’s next move.

He has won belts in four divisions and, before filing his lawsuit, was ordered by the WBC to contest their vacant super-middleweight title against Avni Yildirim.

The Turkish fighter’s promoter Ahmet Oner has indicated that Premier Boxing Champions could participate in the purse bid for the fight and was hopeful that Canelo-Yildirim could still happen.

“Canelo is a big chance for us, so I let things go smooth,” Oner told Sky Sports. “Let him resolve his issues, if it’s possible.”

DuBoef, the president of Top Rank, told Sky Sports about Canelo’s lawsuit against his own promoter: “It’s not the first time a network, a promoter and a fighter have been at odds.

“Canelo is obviously one of the biggest attractions in the world and a terrific fighter.

“The marriage between the smart thinking of DAZN, to get someone who can draw that much attention in the US, was terrific for them. But the economics was a different story.

“We want to see Canelo back in the ring because his window of opportunity as an athlete gets smaller and smaller. He elevates the sport for all of us.

“He’s locked up in a relationship and they need to play that out. Hopefully they will work it out civilly and he gets back in the ring.”

Top Rank have split from big-name fighters such as Floyd Mayweather, Manny Pacquiao and Oscar De La Hoya (who is now Canelo’s promoter at Golden Boy).

DuBoef said: “When you have a long run with a fighter, a good partnership that starts at the beginning? We plant the seed, water it, and the stalk grows. Those relationships are the hardest ones because there is a history and a sense of collaborative ownership of the overall product.

“It does, unfortunately at times, impasse. It doesn’t matter who the fighter is. At some point you sit across the table and say: ‘How are we going to figure this out?’

“That’s what they need to figure out.

“Sit down, dig deep, look back at each other and the relationship and say: ‘How do we make it good?’

“The difficult ones are when you have a deep history in fostering the product of a fighter becoming a superstar. When there is a sideways move, how do you bring everyone back to the table?”