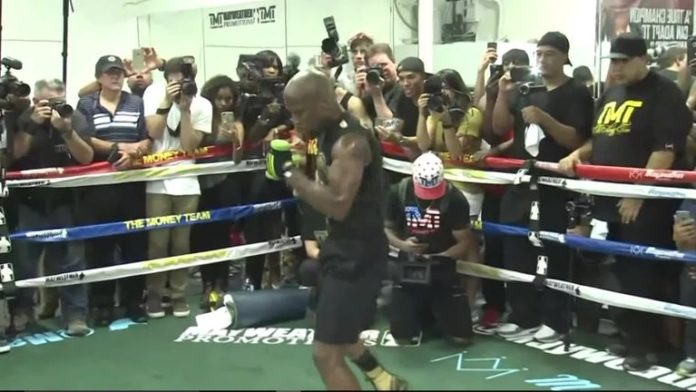 YouTuber Logan Paul has been urged towards the bizarre prospect of a fight with Floyd Mayweather.

Mayweather vs Logan Paul this year!

The speculation began when a fellow YouTuber, Keemstar, told his 2.8m Twitter followers that he had inside-information telling him Mayweather would step back into the ring to fight Paul.

Ryan Garcia, the talented US lightweight known for his online following, tweeted to mock Paul’s chances in the fantasy fight.

The crazy prospect would mean Mayweather, who retired in 2017 with a 50-0 record as an all-time boxing great, facing an opponent with just one professional fight which was lost.

Paul was beaten by fellow YouTuber KSI last year in each of their pro debuts.

Mayweather’s 50th and final victory did come against Conor McGregor who, as a UFC superstar, had never made a professional boxing appearance before.

Mayweather, 43, has since defeated Tenshin Nasukawa, a Japanese kickboxer, in an exhibition bout.

But those occasions would not be as strange as the prospect of facing Paul, whose YouTube following enabled him to draw enough interest in a boxing match against KSI of the same community.

Paul tweeted a challenge to Mayweather in the aftermath of his loss to KSI.

And Mayweather previously teased on social media that he was working on “another spectacular event” alongside Dana White, the UFC president.