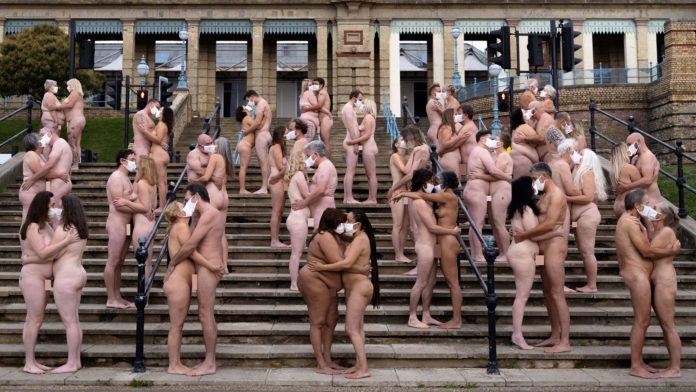 More than 200 members of the public have gathered for a socially distanced nude art installation at London’s Alexandra Palace, wearing nothing but face masks.

It’s the UK’s first major participatory work of art since lockdown and aims to bring people together, at the same time as encouraging mask wearing and social distancing during the coronavirus pandemic.

The shoot – titled Everyone Together – was led by artist and photographer Spencer Tunick and celebrated Sky Arts becoming free for everyone to watch from today.

Live coverage of the latest coronavirus news and updates

Created in the early hours of the morning, 220 volunteers stripped completely naked – apart from white face coverings – and were arranged into position in a one-way queue via megaphone.

Filmed before the “rule of six” came into force, models were made up of people of all ages and genders and from all walks of life – including doctors, care home helpers, teachers and government workers.

Participants – including one male-model showing-off his neck-to-ankle tattoos – stood at least one metre apart at all times unless they shared a bubble.

However, in a case of not always believing your eyes, due to perspective against the landscape, some images can give the appearance that participants are closer than they actually were.

Tunick, who is known for his large-scale exploration of nudity in public, has been exhibiting worldwide using thousands of volunteers for over 25 years.

Talking about the ambitious project, he said he wanted to collaborate with the public to break down barriers and to reconsider our proximity with strangers.

He said: “The reality of masses of people close together – shoulder to shoulder, skin touching skin – may be something of the past for now, but still the desire is there for that natural connectivity, perhaps more so now than ever.”

Director of Sky Arts, Phil Edgar Jones, called it “a landmark cultural moment… demonstrating that art is for – and about – everybody”.

Old favourites including Portrait Artist Of The Year and The South Bank Show with Melvyn Bragg will also be back for Autumn.

Sky Arts is UK’s only channel dedicated to arts and culture and is now available for all on Freeview and Freesat.