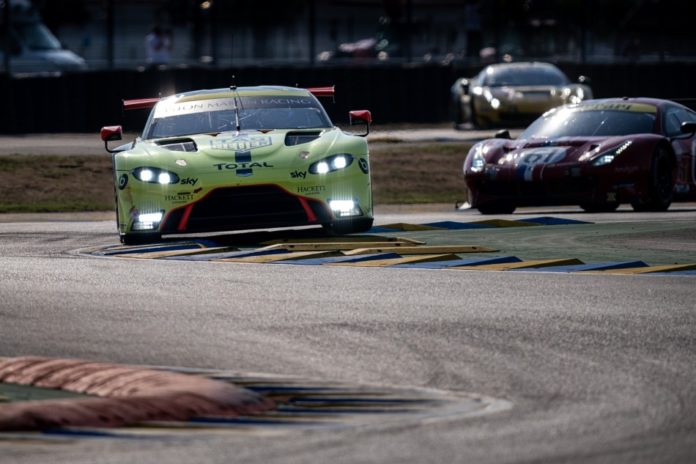 The first practice session for the 2020 24 Hours of Le Mans, Round 7 of the 2019/20 FIA World Endurance Championship, saw the no8 Toyota Gazoo Racing TS050 Hybrid head the timing screens with the no97 Aston Martin Racing Vantage leading the LMGTE Pro category.

The three-hour session saw one safety car period to clear some debris at pit entry and a red flag due to the no89 Team Project 1 Porsche going off track at Indianapolis.  The session was restarted when the Porsche was removed from the gravel and the driver recovered the car back to the pits.

The session ended with the no8 Toyota of Kazuki Nakajima setting a 3m21.656 lap, three tenths ahead of the no7 TS050, which had been the fastest car for most of the session. The two Rebellion Racing R13s were 3rd and 4th quickest with the no1 R13-Gibson two seconds ahead of the sister car with a 3m23.155, 1.499s behind the no8 Toyota.

In LMGTE Pro Aston Martin made it a 1-2 with the no97 Vantage of Alex Lynn posting a 3m53.930, one second faster than the no95 Vantage.  Last year’s 24 Hours of Le Mans class victors, the no51 AF Corse Ferrari, were third fastest with a 3m55.186, two tenths behind the no95 Aston Martin.  Reigning champions Porsche were down the order with the no92 911 7th in class and the no91 Porsche 8th in class.

Aston Martin also headed the LMGTE Am class with the no98 Vantage of Ross Gunn finishing ahead of five LMGTE Pro cars with a 3m55.484 lap.  The no72 Hub Auto Racing Ferrari was second fastest with a 3m56.350 and the no70 MR Racing Ferrari just over two tenths behind the no72 Ferrari.