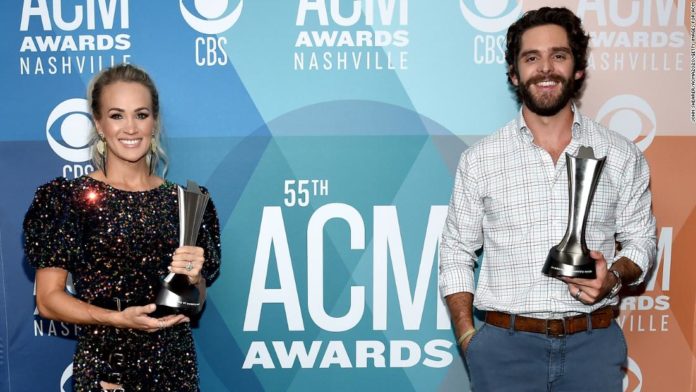 Carrie Underwood and Thomas Rhett tied for one of the biggest awards of the night, Entertainer of the Year.
It was Underwood’s third win, tying her with Taylor Swift as the woman with the most wins in the category, while it was Rhett’s first time.
But on social media there were some gripes that Underwood shouldn’t have had to share the award and that it was misogynistic.
“You couldn’t stand to give it to a female just one freaking year, so you make her share it and award the male as well?!” one person tweeted in response to the Academy’s tweet announcing the win.
For their part, Underwood and Rhett were gracious in sharing the win.
“Keith, what is happening right now,” Rhett said to the show’s host, Keith Urban, before launching into his acceptance speech.
Underwood bumped elbows with Urban before accepting the award, in which she gave “all glory, glory to God.”
“Thank you to the ACM not just for this (award) but for putting me in such incredible company,” she said. “I am more than happy to share this with Thomas Rhett and just to have my name mentioned with his.”