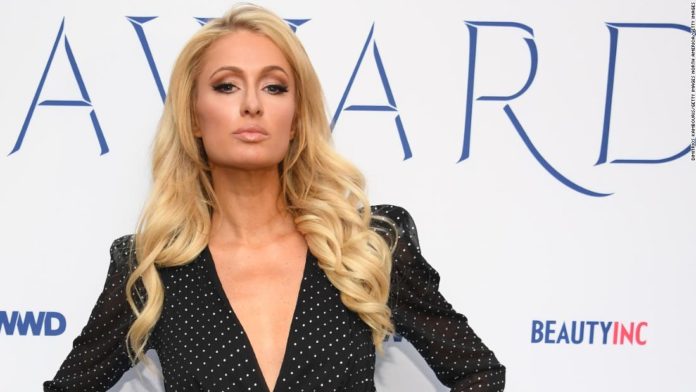 In an interview with CNN to promote the project, Alexandra Dean, who worked with Hilton for a year to make the film, went in expecting to make a documentary about Hilton’s public persona built on her brand and ended up with a heartbreaking and touching story about trauma, family and authenticity.
In the film, Hilton says she experienced physical and emotional abuse at the Provo Canyon School, a Utah boarding school for troubled teens, where she spent 11 months as a teen.
Hilton, now 39, says in the documentary that she still suffers from PTSD from her time at the institution.
CNN has reached out to administrators at the Provo Canyon School for comment.
“We are aware of a new documentary referencing Provo Canyon School (PCS). Please note that PCS was sold by its previous ownership in August 2000. We therefore cannot comment on the operations or patient experience prior to that time,” reads a statement on the school’s website. “We are committed to providing high-quality care to youth with special, and often complex, emotional, behavioral and psychiatric needs.”
So, how did Dean uncover what Hilton had never even told her own family?
Dean told CNN she was first contacted by IPC, the production company tied to the film, after someone there saw her last documentary, “Bombshell: The Hedy Lamarr Story,” about the glamorous Hollywood star who was misunderstood.
“They saw all these parallels between ‘Bombshell’ and Paris,” Dean says, adding that her first thought was “interesting.”
“I thought Paris is definitely unseen and misunderstood. I mean, I didn’t see her or understand her for decades. I definitely wrote her off,” Dean said.
All that changed when she began to spend time with Hilton at her home and traveled with her around the world.
“She has a billion dollar empire. She runs it and whether you like it or not, whether you like her or not, you have to respect that,” Dean said. “It’s not an easy thing to do. She does it almost solo. I saw that up close.”
While filming the socialite, something else was also coming to light.
Early in the project, Dean showed up at Hilton’s house to shoot interviews, accompanied by a crew that was costing $15,000 for the day. Hilton, she said, wouldn’t come to the door because she was asleep in her bedroom. Initially Dean was annoyed, but said that day is when she discovered there was another story unfolding.
“At that time, I didn’t realize what a big problem insomnia was for her, and I ended up sending the crew off to do something else and waiting in her living room,” she recalled.
Dean said she eventually went into Hilton’s bedroom and sat there with her for a while.
“I was like, look, I understand this is a huge thing. I’m going to give you time to sleep. But when I come back, I want to talk about this. This is obviously a huge part of your life,” Dean said.
Hilton began to open up about why she couldn’t sleep and revealed her experiences of abuse, Dean said.
The director reconnected Hilton to a few former classmates from Provo, who say they also suffer PTSD from their time at the school.
“We did a lot of talking to prep and because my sister had been through an institution and I had witnessed it up close, I was able to talk to them about my own process, her process,” Dean said. “We really did prep a lot because we didn’t want to trigger anyone or send them down the spiral. I wanted this to be something for everybody that was a positive outcome.”
Connecting with the former students has had a massive impact on Hilton, according to Dean. She’s leading a campaign called Breaking Code Silence, which aims to raise awareness about some of the problematic rehab centers for troubled youth.
“She’s very excited about it,” Dean said. “She’s very energized and focused and I think it’s like a new sense of purpose.
“There’s a very real sense [in the doc] that it is in doing something for the others that suffer from the same trauma that you can start to actually become free of what you experienced,” Dean added.
“This Is Paris,” a YouTube Originals documentary, is currently available for free (with ads) on Hilton’s YouTube channel.