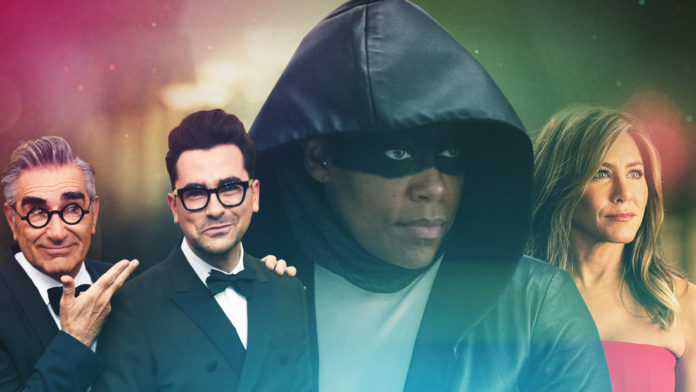 A version of this story appeared in CNN’s “Pop Life Chronicles” newsletter. To get it in your inbox, sign up for free here. Tell us what you’d like to see more of in the newsletter at entertainment.newsletter@cnn.com.

A global pandemic, racial strife, an upcoming presidential election that has the country divided and a climate crisis with swaths of the Western United States on fire do not a happy year make — and that’s just some of what has been going on in 2020.
So, it’s not all that surprising if many of us feel like awards shows don’t rank near the top of what we should be focusing on at the moment.
But that list of tribulations is exactly why pop culture — and television specifically — is incredibly vital right now.
TV doesn’t just inform us and reflect who we are, it connects us and offers a refuge of stories we can escape to when it all becomes too much.
More from ‘Pop Life Chronicles’
I don’t know about you, but this year feels like it’s the very definition of “too much.” Here are just a few ways TV has helped carry the day.
“Friends”: Miss popping down to Starbucks for your fave latte? When I felt that way recently, I decided to stream some episodes of this hit series. I was not a fan when it was originally on air because of the lack of representation (like, how do you live in New York City and not have an incredibly diverse cast?).
Venturing virtually to the fictional Central Perk coffee shop on “Friends” this time around, however, felt comforting. It reminded me of meeting up with my peeps and the fun (and drama) that can ensue when that happens.
It was easy watching and made me feel hopeful for an in-person reunion with my own friends someday. Never in a million years would I have imagined that a ’90s sitcom would inspire me to look toward the future, but here we are.
Plus, now I finally feel armed and ready for any trivia question regarding the “Smelly Cat” song.
If and when the “Friends” reunion finally appears, I’ll be there for Rachel, Ross, Monica and the entire gang.
The 72nd Primetime Emmy Awards: Speaking of “Friends,” Jennifer Aniston and “The Morning Show” are among the nominees at Sunday’s Emmy Awards, and it feels right to pause and recognize some of the amazing television in the past year.
The most-nominated series, HBO’s “Watchmen” with 26 nods, feels eerily timely with its focus on racism at a time of countrywide civil unrest due to racial injustice. (HBO is owned by CNN’s parent company).
I know of at least three people who, since we started quarantining, have discovered the delights of “Schitt’s Creek,” which is up for best comedy.
And there is plenty more where that came from.
Luckily for us consumers, the streaming wars are raging hot and heavy with newcomers Apple TV+, Disney+, HBO Max and Peacock, so there’s a plethora of content to enjoy.
As we remain in this time of ongoing uncertainty, Hollywood is also trying to get back to work to create new shows.
Recently talking to my CNN colleague Dr. Sanjay Gupta about Hollywood and the pandemic for his podcast, “Coronavirus: Fact vs. Fiction,” I made the point about how the industry is just a microcosm of our country, and that’s evident with even the awards shows.
The Daytime Emmys, the BET Awards, the MTV Video Music Awards, the Academy of Country Music Awards and now the Primetime Emmys — like the rest of us — have all had to pivot in the time of Covid-19 to keep on keeping on.
Some have done it more successfully than others, capturing the spirit of what’s been going on in our world while still honoring the art that is helping us through.
With many of us feeling disconnected because of quarantine, TV is one medium that has brought us together in many ways.
My friends and I now trade tips fast and furiously on what to watch, and I’ve found that they know me so much better than the Netflix algorithm.
Imagine that.
Back in March, there was a virtual rewatch party of Beyoncé’s “Homecoming,” which for me set the tone of how I could quarantine and not feel like the world was passing me by as I awaited it being safe enough to return to.
Reading the tweets from those who were jamming to Beyoncé at home — just like I was — made me feel like there was indeed a way we could be alone, together.
It was television that gave me that gift.
Different eras have often been referred to as “The Golden Age of Television.” But in this dark time, the medium shines more brightly than it ever has before.
And that is definitely worth celebrating.

Three things to watch:
‘Get Organized with The Home Edit’
All I want for Christmas is for Clea Shearer and Joanna Teplin to come organize my closet.
This addictive new series features the expert home organizers sweeping into the homes of celebrities and everyday clients to “edit, categorize and contain their clutter to create stunning spaces.”
If I have to stay home, I want stunning spaces, too!
“Get Organized with The Home Edit” is currently streaming on Netflix.
Magic usually happens when Ryan Murphy and Sarah Paulson come together.
The producer and actress have teamed up for a new series inspired by the classic film “One Flew Over the Cuckoo’s Nest.”
Paulson plays Mildred Ratched, who in 1947 begins working as a nurse at a leading psychiatric hospital.
“But beneath her stylish exterior lurks a growing darkness,” according to Netflix.
“Ratched” starts streaming Friday.
‘The Invisible Man’
Might as well continue the horror theme and get a jump-start on Halloween month with this thriller if you are into scary stuff.
Elisabeth Moss stars in this unsettling film about a woman whose scientist boyfriend apparently dies by suicide. She starts to believe he has acquired the ability to be invisible and is terrorizing her.
“The Invisible Man” starts streaming on HBO Max on Saturday.
Two things to listen to:
The pandemic has been both a blessing and a curse for Keith Urban.
Though he’s been unable to tour as he had planned, the upside is he has had time to complete his 11th studio album.
“The Speed of Now Part 1” comes out Friday, and Urban seems pleased with it.
“I’m really, really happy with the record and grateful that I spent as long on it as I got to do,” he told the Toronto Sun. “I just wish it was for a different reason.”
Not that Urban, who hosted this week’s 55th Academy of Country Music Awards, ever really paused from making music.
He has hosted some streaming concerts from home in recent months, and was one of the first artists to put on a show at a drive-in movie theater when he performed for Vanderbilt University Medical Center’s health care workers just outside Nashville, Tennessee, in mid-May.
The singer Yusuf Islam (formerly known as Cat Stevens) has reimagined his “Tea for the Tillerman” in honor of the 50th anniversary of the pivotal album, which included hits “Wild World” and “Father and Son.”
“This album is very important because it’s celebrating so many people,” he told Rolling Stone. “It’s their soundtrack and people’s memories are so intertwined with the notes of this album and the music of this album. I hope a lot of people will love to grow this new album.”
“Tea for the Tillerman2” contains new renditions of the original 11 tracks and drops Friday.
One thing to talk about:
Gladys Knight and Patti LaBelle having a “battle” on Instagram Live’s Verzuz still has me on a high.
That’s because the two divas actually sang and reminded me of how much I miss live music.
My grandmother was a major Knight fan. As a little girl, I would sit on the floor — because no way was I allowed to sit on the couch that was encased in a plastic cover to keep it pristine — and listen to her Gladys Knight and the Pips albums on the stereo.
While the usual Verzuz events feature a pair of artists playing their hits and offering commentary, Knight and LaBelle totally raised the bar by performing their songs — and boy, did they sing.
Live music is so good for the soul. The sooner we can get back to concerts, the happier I will be.
Until then, I’m grateful for artists like Knight and LaBelle, who have both the range and the chutzpah to give it to us virtually. From now on, I’m really going to need the artists who battle to come with the vocals.

Which two artists would you like to see be featured on Verzuz? Email me or hit me up with your thoughts on social and let’s discuss.

I love Chris Evans.
This is not breaking news, because who doesn’t love “Captain America”?
That love was cemented this week with his response after he seemed to accidentally share a NSFW photo of, well, himself.
That said photo generated a lot of buzz and had some of my friends begging me to share the pic (If my pastor is reading this, sir, I would NEVER).
But rather than issue a statement or even be cheeky about it (that wasn’t the body part featured in the photo by the way), Evans used it as an opportunity to urge folks to get out and vote.
That’s a superhero move we should all get behind.
While some people get annoyed when celebrities get political, you have to be aware that particular horse is well out of the barn when the President of the United States is a former reality star.
Besides, celebrities are citizens, too — and if Captain America can’t urge folks to get out the vote, who can?
Pop back here next Thursday for all the latest happenings that matter in Hollywood.