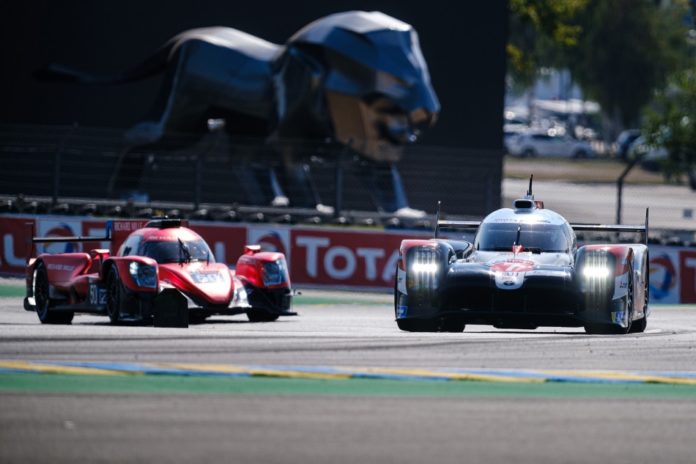 In the first of two qualifying sessions the two Toyota Gazoo Racing TS050 Hybrids continued to dominate as they have in Free Practice, with the no7 Toyota finished the 45-minute session at the top of the list of 59 cars.  In LMGTE Pro the two Aston Martin Racing Vantages also posted the top two times in the session, with the no95 Vantage coming out on top.  The top six cars in each class will now go forward to tomorrow’s Hyperpole where the pole position holders in the four classes will be decided for the 2020 24 Hours of Le Mans.

In LMP1 all five entries will go forward to the Hyperpole session but on pace the overall pole will be either the no7 or no8 Toyotas.  The best time in the 45-minute session was set by Kamui Kobayashi, who lapped the 13.6km track in 3m17.089, 0.247 seconds faster than Kazuki Nakajima in the no8 Toyota.  The no1 Rebellion Racing R13-Gibson was third fastest, with Bruno Senna setting a 3m21.598 lap, 2.8 seconds ahead of the no4 Bykolles Racing Team entry and over 3 seconds ahead of the no3 Rebellion R13.

In LMGTE Pro the no95 Aston Martin Racing Vantage set a lap of 3m50.747 with Marco Sorensen at the wheel, 0.125s ahead of Alex Lynn in the no97 Aston Martin.  The no51 AF Corse Ferrari had been languishing outside of the top six but with just a few minutes on the clock Alessandro Pier Guidi put in a 3m51.244 to claim third and a place in tomorrow’s Hyperpole.

Racing Team Nederlands topped the LMP2 times with Nyck De Vries setting a 3m26.648 lap time, 0.449s ahead of the no37 Jackie Chan DC Racing Oreca of Will Stevens, with Paul Di Resta in the no22 United Autosports Oreca third fastest just 0.051s behind Stevens.

The no26 G-Drive Racing Aurus, the no32 United Autosports Oreca and the no33 High Class Racing Oreca make up the top six LMP2 cars that go through to the Hyperpole session.

Aston Martin also topped out the LMGTE Am entry with the no98 Aston Martin Racing Vantage and the no90 TF Sport Vantage taking the top two places.  Augusto Farfus set a 3m52.778 lap in the no98, 0.183s ahead of Charlie Eastwood.

Gulf Racing was third fastest with Ben Barker setting a 3m52.970, just 0.009s behind Eastwood. The no61 Luzich Racing Ferrari was 4th, the no77 Dempsey-Proton Racing Porsche and the no56 Team Project 1 Porsche completed the top six in the class.