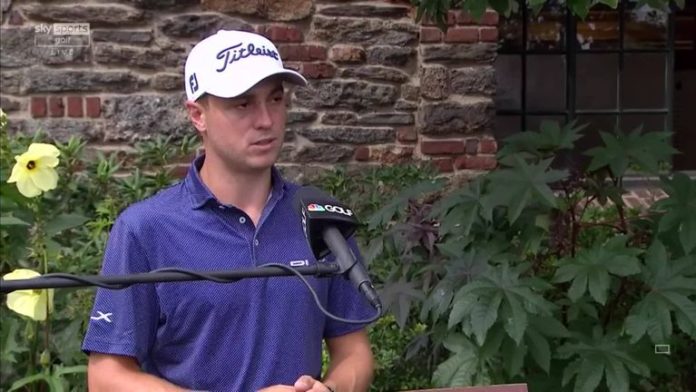 “As great of a round and fun as it was, it’s over with now, and I need to get over it because I got 54 more holes to try to play well and shoot some good scores.”

Justin Thomas described his start to the US Open as one of his best rounds in recent memory after setting the clubhouse target at Winged Foot.

The world No 3 registered his lowest first-round score at a major with a five-under 65 in New York, mixing six birdies with a sole bogey to grab a one-shot advantage over the rest of the morning starters.

Thomas has only one top-20 finish in his previous five US Open appearances and missed the cut in last year’s contest at Pebble Beach, with the 2017 PGA champion encouraged by his start to the second major of the year.

“It was a good day for me from the start,” Thomas said. “I’ve just played really, really solidly. Hit a lot of really quality tee shots and only had a few squirrely ones, it felt like.

“The few greens I missed, I hit great bunker shots to give myself good par chances. It was a really, really solid round of golf, one of the best rounds I’ve played in a while tee to green.

“There are a couple things here and there that definitely could have been better, but I made sure all of my misses were in the right spot and that’s what you have to do at a US Open.

“As great of a round and fun as it was, it’s over with now, and I need to get over it because I got 54 more holes to try to play well and shoot some good scores.”

Thomas held a one-shot advantage over 2018 Masters champion Patrick Reed, who made a hole-in-one at the par-three seventh on his way to a four-under 66, while three-time major winner Jordan Spieth dropped down the leaderboard with an erratic opening-round 73.

A 15-foot birdie at the 15th for Spieth – who only found three fairways during his opening round – was cancelled out by another wayward tee shot and bogey at the 17th, leaving the former world No 1 eight strokes off the pace.

“There’s a lot that’s off,” Spieth said. “I’m not really sure. If I knew, I’d fix it. I’m kind of working through it and looking forward to having a little more time off to figure it out.

“I mean, I’m late behind it. The second I try to get back out in front of, it’s hooking. Standing on a tee at the US Open and not exactly knowing where the ball is going to go is not a great feeling. It’s not incredibly enjoyable. But I’ll grind it out, I don’t ever give up. I have no reason to.

“I feel that, even with not having much tee to green, I can somehow still shoot an even or under par round on this course, and that’s incredible self-belief in the grind.”