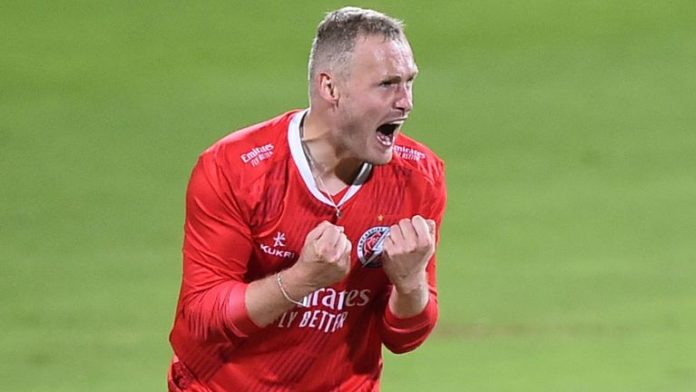 Joe Root’s 39-ball 64 came in vain as Lancashire completed a Vitality Blast double over a depleted Yorkshire and booked their place in the quarter-finals with a seven-run win at Emirates Old Trafford.

Root – who was dismissed for a golden duck in England’s final ODI against Australia at the same venue a day earlier – played exquisitely all around the wicket, striking eight fours and one six as Yorkshire reached 132-2 in the 16th over chasing 168 for victory over their Roses rivals.

However, when he was brilliantly run out by Lancashire wicketkeeper George Lavelle, Yorkshire stumbled and were then only able to score four of the 12 runs they required from Saqib Mahmood’s superb final over.

Lancashire had tripped up with the bat themselves at the backend of their innings, slipping from 132-1 in the 15th over as Liam Livingstone (69) and Steven Croft (58) were dismissed, with Root bagging two wickets amid collapses of 3-3 and 5-16 as the hosts posted 167-6.

Root’s third half-century of the Blast campaign – he hit back-to-back fifties against Derbyshire and Nottinghamshire in late August – and second-wicket stand of 91 with Adam Lyth (45) had Yorkshire on course for victory.

But their run outs turned the game on its head and Lancashire fought back to join Nottinghamshire in advancing from the North Group and end Yorkshire’s faint qualification hopes with a second Roses win in four days.

Root’s return from international duty had been a timely boost for the Vikings, who remain without David Willey, Matthew Fisher, Tom Kohler-Cadmore and Josh Poysden due to COVID-19 guidelines.

Willey has tested positive for coronavirus and Fisher, Kohler-Cadmore and Poysden are also self-isolating having been in close contact with him.

Root (2-25) firstly impressed with the ball, including having Rob Jones stumped off a superb leg-break, but then gave a reminder to England’s selectors of his skills with the bat having slipped out of the T20 reckoning despite being the team’s top run-scorer at the 2016 World T20 in India.

Livingstone and Croft, who put on 130 for Lancashire’s second wicket, also managed half-centuries on the night, though both should have fallen lbw early in their innings only for the umpires to keep their fingers down.

Nottinghamshire’s Ben Duckett cracked a 31-ball 57 not out and shared an unbroken partnership of 98 with Chris Nash (40no) as the Outlaws maintained their unbeaten start to the Blastwith an eight-wicket victory at home to Derbyshire.

The visitors were restricted to 142-8 – Billy Godleman top-scoring with 47 and Jake Ball taking 3-28 for Notts – before the hosts romped home with 5.5 overs remaining as Duckett swept Matt Critchley for his ninth four, to add to one six.