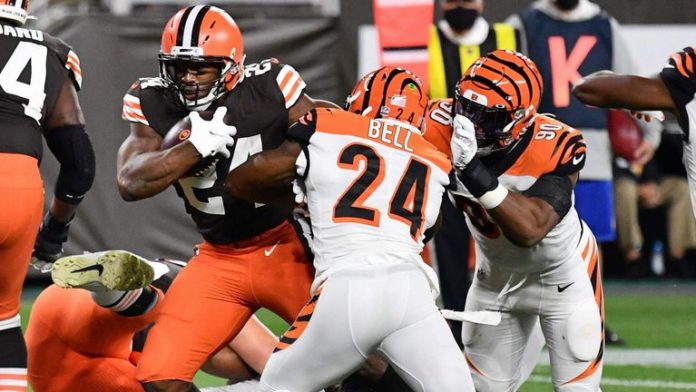 Baker Mayfield threw for 218 yards and two touchdowns while Nick Chubb and Kareem Hunt starred in the running game as the Cleveland Browns got off the mark in 2020 with a 35-30 win over the Cincinnati Bengals on Thursday night.

Chubb rushed for 125 yards and two scores on 22 carries with support from Hunt, who racked up 86 yards on the ground for one touchdown as well as catching another from Mayfield on the night. The Browns quarterback’s other touchdown pass went to Odell Beckham Jr. as he put up four catches for 74 yards.

Watched by around 6,000 fans in the stadium, the Browns went up 28-13 with 5:45 remaining in the third quarter when Chubb ran in from one yard out in a play stemming from Garrett’s strip-sack that was recovered by Joe Jackson just shy of the goalline.

The Browns had been unable to convert on their previous drive as a 23-yard touchdown run from Chubb was scratched off after being deemed short, before Cleveland were unable to get over the line on the next four attempts.

Burrow connected with Mike Thomas for a four-yard touchdown to move the Bengals within 28-23 with 5:55 left, before the Browns responded with a six-play, 75-yard drive capped by Hunt’s one-yard run to restore their 12-point advantage with just under four minutes left.

The Heisman Trophy winner added a nine-yard touchdown pass to Tyler Boyd with 43 seconds to play, only for the Browns to recover the onside kick and run down the clock.

Beckham Jr’s moment had arrived early in the second quarter when Mayfield found him down the left sideline for a 43-yard touchdown, to which Burrow replied by locating C.J. Uzomah for a 23-yard passing touchdown – his first in the NFL.

Uzomah (four catches for 42 yards) was carted off the field after he sustained a right Achilles injury with 8:01 to play in the contest.