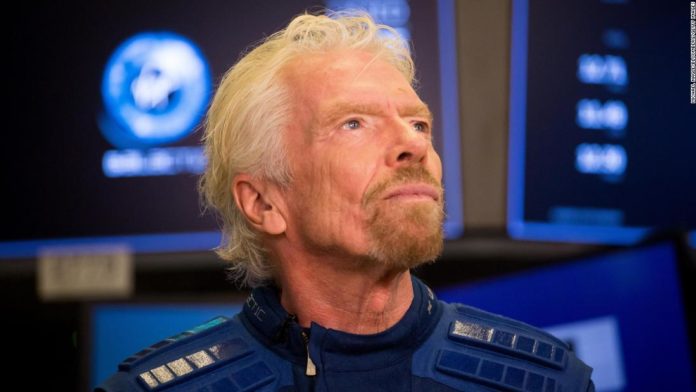 VG Acquisition Corp, a “blank-check” company founded by the leader of Virgin Group, filed on Wednesday for an initial public offering on the New York Stock Exchange.
The goal: raise $400 million and use that money to buy undervalued American and European consumer businesses in sectors where Virgin has had success, including travel, leisure, entertainment and financial services.
“We believe that the Covid-19 crisis has caused temporary dislocations in several of our focus sectors, creating a rare opportunity to invest in fundamentally strong target businesses at attractive valuations,” the company said in a filing with the US Securities and Exchange Commission. A target has not yet been selected, the company said in its filing.
The plan could help Branson take advantage of seemingly limitless investor appetite for special purpose acquisition companies, or SPACs, which are shell companies with no or limited operating assets that raise capital through an IPO for the purpose of buying existing businesses.
Branson is the latest high-profile individual to raise capital via a SPAC, after hedge fund billionaire Bill Ackman’s Pershing Square Tontine Holdings raised $4 billion in the largest IPO of its kind on record in July.
In the first eight months of this year, SPACs raised over $33 billion across 81 IPOs, more than double the proceeds raised in 2019, according to Deloitte.
“This surge has been driven by the influx of high-profile investors and management teams entering the SPAC space, coupled with an abundance of uninvested capital that had largely been sitting out the first half of 2020,” the professional services firm said in a report this month.
Branson already has some experience with the investment vehicles, having used a SPAC to take his space tourism business Virgin Galactic (SPCE) public last year.

But investors may wonder about the timing. Branson’s businesses, such as the recently launched Virgin Voyages cruise line and Virgin Hotels, which are both based in the United States, have been badly hurt by the pandemic and will continue to struggle in the face of travel and tourism’s worst ever downturn.
In May, Virgin Group was forced to relinquish control of Virgin Galactic to raise hundreds of millions of dollars to fund other group companies, SEC filings show.
The carriers Virgin Atlantic and Virgin Australia have both needed outside investment to remain solvent. Virgin Atlantic secured £750 million ($970 million) from new and existing shareholders in July as part of a £1.2 billion ($1.6 billion) rescue package, while Virgin Australia was sold to Bain Capital for an undisclosed amount.
Branson said in April that he would raise money against his Necker Island estate in the Caribbean to protect jobs across the group.
With so much attention on existing Virgin Group companies, Branson may have little time to hunt for new prospects.
VG Acquisition Corp has given itself two years to find a deal and is not limiting itself to any particular sectors, telling investors that it could buy something outside of Virgin Group’s core categories if it finds the right opportunity.
“We remain open to the significant number of opportunities that we expect will present themselves upon completion of this offering, particularly given our founder’s public profile and the positive attention he generates within the business community,” it said.
Branson has a reputation for taking bold risks and seeking to disrupt sectors with established operators. Having started out as a mail order record retailer in 1970, the Virgin brand is now attached to more than 40 businesses worldwide, which together generated $22 billion of revenue in their latest financial year.
— Michelle Toh contributed reporting.