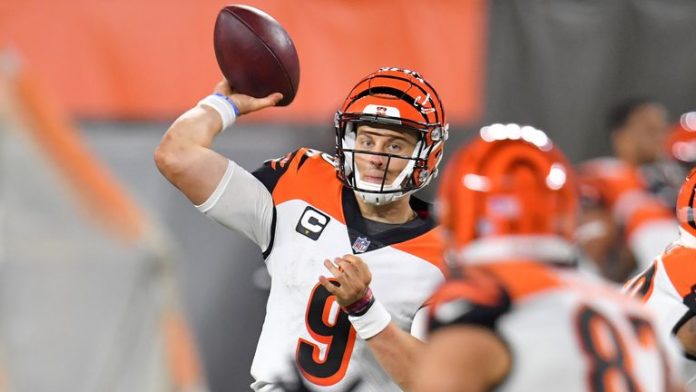 “It’s always good to see another young guy come in and take over. And obviously that team loves him. They follow him and he leads them.”

The rookie quarterback was unfortunate to find himself on the losing side on Thursday night as he went 37 of 61 passing for 316 yards, three touchdowns and zero interceptions in the Cincinnati Bengals’ 35-30 defeat to the Cleveland Browns.

Much like his time at LSU, the No 1 overall pick displayed remarkable composure in what was often a collapsing pocket, going through his progressions with astute awareness of the pressure around him and showcasing his ability to escape using his legs.

“I didn’t get a chance to watch him last week, but I heard the rave reviews,” said Browns quarterback Baker Mayfield.

“It’s true, the hype is real with Joe. I thought he played extremely well. Just being decisive, keeping plays extended, taking care of the ball. I thought he did a great job.

“It’s always good to see another young guy come in and take over. And obviously that team loves him. They follow him and he leads them.”

Burrow chalked up his first NFL passing touchdown in a 23-yard connection with C.J. Uzomah in the second quarter, before later finding Mike Thomas for a four-yard score to lead the Bengals to within 28-23 with 5:55 remaining on the clock.

He continued the fightback by responding to Cleveland’s six-play, 75-yard scoring drive with a nine-yard touchdown pass to Tyler Boyd in the final minute, before the Browns recovered an onside kick that allowed them to see out the win.

The 23-year-old was sacked three times, including a strip-sack that saw Myles Garrett snatch the ball to set up a series ending with Nick Chubb’s one-yard touchdown run. Burrow and Cincinnati are now 0-2 to start the season following last week’s narrow-margin loss to the Los Angeles Chargers.

“Losing isn’t very fun,” said Burrow. “This might be the only time in my sporting career that I’ve lost two games in a row.

“Doesn’t feel very good. I know guys in there are hurting and we’re gonna come back to work tomorrow and try and get this thing right.

For the Browns, it was a welcome confidence boost on the back of a gruelling 38-6 Week One defeat to the Baltimore Ravens in which familiar questions regarding their compatibility on offense resurfaced.

Mayfield threw for 218 yards and two touchdowns, a highlight being his 43-yard scoring pass to Odell Beckham Jr as the pair strive to make it work on the field.

“I think that is going to build confidence for us (the Browns),” said Mayfield. “Us playing complementary football with the defense, that is the scary part is if we start clicking and keep getting better, it is going to be a fun ride.”

Nick Chubb meanwhile delivered a reminder of why the Browns would do well to run their offense through him as he rushed for 124 yards and two touchdowns from 22 carries. Kareem Hunt also flourished on the ground with 86 yards for a touchdown off of 10 carries.

“Those are two talented backs and they complement each other, they push each other,” said Browns head coach Kevin Stefanski said.

“We are going to always look for unique ways to get them the rock. They did a very nice job tonight.”