Home Culture Don’t use our song for ‘moronic cause’: Twisted Sister singer has angry... 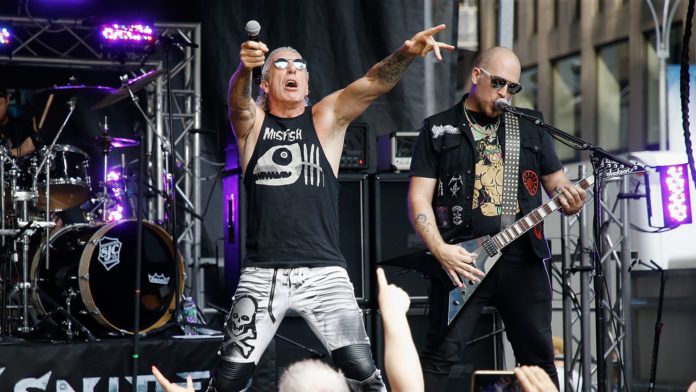 Twisted Sister singer, Dee Snider, condemned anti-maskers using one of the band’s hits while ripping off their face masks.

The group of people removed their masks in a Target store in Florida while playing the band’s “We’re Not Gonna Take It”.

The singer tweeted that the group didn’t have “permission or blessing to use my song for their moronic cause”.

Mr Snider also shared a video recorded by an upset customer which has gained more than 30 million views.

Broward County officials identified three people on video and mailed out fines of $100 (£77) to each of them.

Target also received a fine for not enforcing mask laws, according to the South Florida Sun Sentinel.

Chris Nelson, a member of the group Reopen South Florida – and a regular protester – told local media they organised the “flash mob”.

He posted a video on YouTube, captioning it: “In celebration of Burn Your Mask Day we decided to spread some freedom dust over the shoppers and employees of Target!”

He said he would continue to use the Twisted Sister hit despite criticism, saying “it’s sad” because “it’s a great anthem about freedom and overcoming oppression”

The group of anti-maskers approached customers inside the store, with one woman shouting “we’re Americans, breathe” and “it’s all a lie!”

Another woman told a customer to remove her mask, saying “you don’t need it”.

The group cheered whenever a customer took off their mask.

Police have said any additional people who are identified will also receive fines in the mail.

The protesters arrived at the store with their masks on, however they had left by the time officers arrived.

A Target spokesperson said the group was asked to leave “after they removed their masks and became disruptive and rude to other shoppers”.

Federal health officials have said masks could effectively halt the spread of coronavirus, urging the public to wear them.

Robert Redfield, director of the Centres for Disease Control and Prevention, told a committee of senators that face coverings could be more effective than a vaccine in protecting people from COVID-19 on Wednesday.