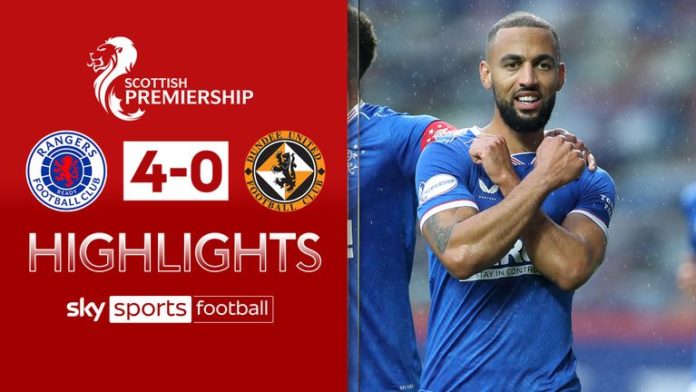 Watch Hibernian vs Rangers live on Sky Sports Football from 11am on Sunday; Kick-off at 12pm

Steven Gerrard has suggested it will be down to Alfredo Morelos and his agent to decide if he has a long-term future at Rangers, hinting that the Colombian might stay at Ibrox.

Morelos has been the focus of transfer speculation all summer but was back on the scoresheet on Thursday night as he scored his 20th European goal for Gers with a double in their 5-0 win over Lincoln Red Imps.

Asked if Morelos might still be a Rangers player by the time the transfer window shuts in October, Gerrard said: “Of course there is still a possibility because no one knows what’s going to happen in the coming days and weeks.

“I said a few weeks back that in my situation you just take each day as it comes. The good thing is Alfredo is playing well, he’s in much better shape, he’s looking sharper, he’s scoring goals.

“And he’s looking happy, so we just take it day by day. I think that’s a question for Alfredo and his representation to answer, rather than myself, but for me at the moment he is fit and he’s available.”

Morelos was left out of the matchday squad for Rangers’ 2-0 win against Kilmarnock near the end of August – a decision described as “pretty simple” by Gerrard – who accused the striker of “taking his eye off the ball” amid interest from Lille.

Former Rangers striker and Sky Sports pundit Kris Boyd described Morelos’ attitude as “disgraceful”, but Gerrard then backed his player and recalled him for the win over Hamilton the following week.

The 24-year-old’s latest scoring milestone follows last term’s incredible streak – when he became the first player to hit 14 goals before Christmas in a UEFA tournament – and in total he has scored 81 goals in 144 games for Rangers since signing for the club in 2017.