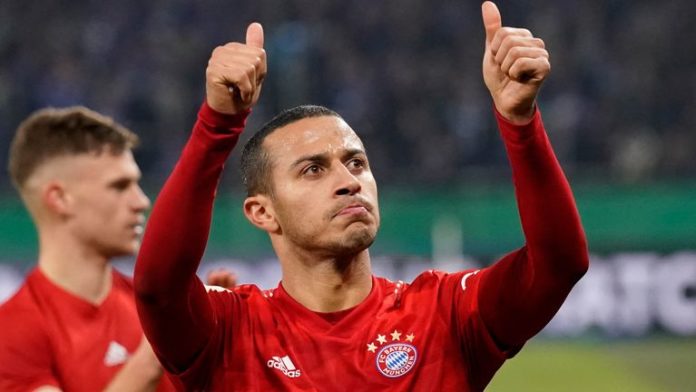 Jurgen Klopp says the potential signing of Thiago Alcantara from Bayern Munich will not mean he is forced to sell any of his current Liverpool stars.

Alcantara has arrived on Merseyside to complete a move which will see the Premier League champions pay £20m with the potential for £5m in add-ons.

Although it initially looked like any deal would be dependent on the future of Georginio Wijnaldum, who is also in the final year of his Anfield contract, Klopp insists it does not mean any imminent departures.

Klopp said: “If it (Thiago signing) happens it has no impact on anyone’s future in a negative way.

“No one has to leave if someone comes in or anything like that. It has no impact.”

The commentator was just saying how comfortable Paris Saint-Germain were looking when it happened. “They are quite happy for Bayern to have the ball in their half,” he said. But it was at that precise moment that Thiago Alcantara weaved his magic, firing a crisp pass between the lines.

The ball was in the back of the net seconds later. The goal was enough to win the 2020 Champions League for Bayern Munich and while scorer Kingsley Coman was the official man of the match, the role of Thiago in the team’s triumph escaped absolutely no one.

At 29 and reluctant to sign a new contract, Bayern realised they might have to sell. Liverpool are now ready to pounce and it is easy to see why the move might appeal. Jurgen Klopp’s side can do almost anything. But they cannot do what Thiago can do…

Read the full feature on what Thiago would offer Liverpool here