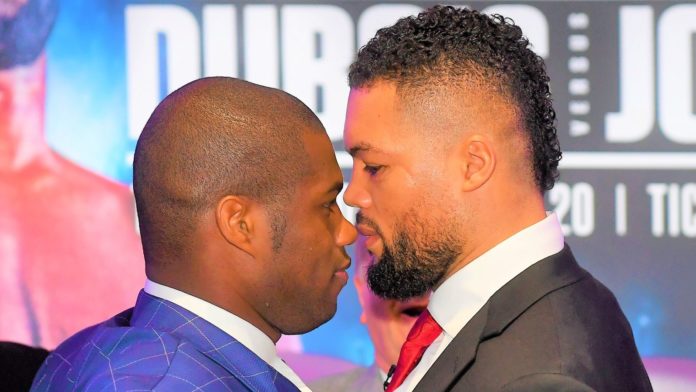 “He has been built up and looks amazing by beating low-level opposition.”

Joe Joyce believes he saw Daniel Dubois react with inexperience during a previous fight and has warned: “The bigger you are built, the harder your fall”.

Undefeated British heavyweights Joyce and Dubois are set to collide on October 24 although it has already been postponed twice due to the coronavirus pandemic.

“The fight he had with Richard Lartey, he got hit and panicked,” Joyce told Sky Sports.

“I’ll be throwing big, heavy, powerful shots and we’ll see if he can take those.”

Joyce is an Olympic silver medallist with an extensive amateur background and experience of sparring with Anthony Joshua and Tyson Fury, so insists Dubois won’t necessarily be his hardest-punching rival.

“No. With pro gloves? Maybe,” he said. “Bermane Stiverne and Ian Lewison were very strong. Joshua and [sparring partner] Martin Bakole punch hard. I was in the ring in sparring with Dubois when he was 16 or 17.

Joyce insists it is disrespectful to consider him the underdog against Dubois, who is 11 years younger.

“It is, of course,” Joyce said. “He has been built up and looks amazing by beating low-level opposition. The bigger you are built, the harder your fall.”

“It was a good performance but he didn’t have anyone good in front of him,” Joyce said.

“I was looking forward to him facing Erik Pfeifer, he’s a good boxer and I was interested to see how Dubois got on. Maybe I would have been able to take something from that.

“The public think he’s going to smash me up. So I have no pressure on me because apparently I will lose. So it will mean a lot more when I beat him.”

Dubois is ranked at No 2 with the WBO, whose champion is Joshua. Only Oleksandr Usyk, who is Joshua’s mandatory challenger, is ranked higher than Dubois.

“When you have a talent like Daniel, the individual route to a world title becomes less important,” his promoter Frank Warren told Sky Sports.

“Before long, he’ll be at the top of all the sanctioning bodies’ rankings and everyone will be running scared from him. If it’s AJ’s WBO title, so be it.”

Former WBO champion Joseph Parker told Sky Sports he is wary of Dubois: “I feel like there’s a big chance we can face each other. He’s ranked No 2 now, so he’s past me, I’m ranked No 3.

“You never know in boxing, there’s match-ups can be made with anyone. I’m keen to fight anyone, I don’t care who it is.”