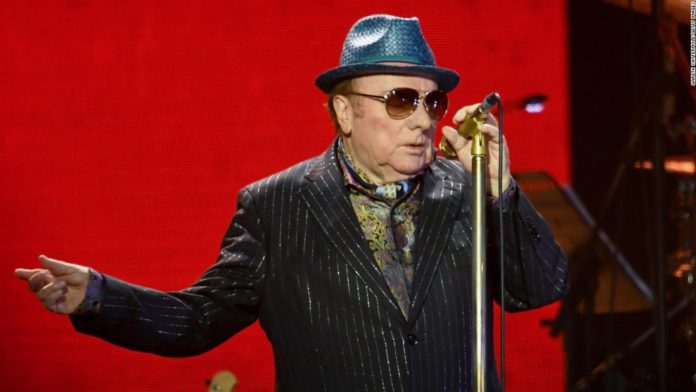 The 74-year-old Northern Ireland musician is best known for the soft-rock classic “Brown Eyed Girl.” But he is no longer so dulcet. His new singles feature lyrics so specific and incendiary they sound as though they were designed to be played at rallies and protests.
In a statement, the Rock & Roll Hall of Famer described the forthcoming songs — “Born to Be Free,” “As I Walked Out” and “No More Lockdowns” — as “songs of protest” that criticize the government’s decisions to shut down businesses, including live music venues.
Morrison said his personal freedoms are being impinged upon.
“I’m not telling people what to do or think. The government is doing a great job of that already,” he said in the statement. “It’s about freedom of choice. I believe people should have the right to think for themselves.”
Morrison’s publicists shared the lyrics to his upcoming songs with CNN. In “As I Walked Out,” he gets hyper-specific, listing off dates when the UK’s guidance around coronavirus changed rapidly.
In “Born to Be Free,” he sings that UK residents seem to have amnesia “trying to remember about the Berlin Wall.” Morrison does not expound upon the comparison.
“No More Lockdown” is perhaps the most blunt of the bunch. Morrison rages against the government-imposed lockdown, singing that officials are “pretending it’s for our safety when it’s really to enslave.”
The Grammy-winner previously has criticized the government for canceling live music shows. In a now-deleted post on his website from August, Morrison called on members of the music industry to “fight the pseudo-science” around Covid-19, the Guardian reported.
Covid-19 is a novel illness, but the science surrounding it is sound. A study released this summer found that US shutdowns prevented about 60 million Covid-19 infections in the country. Shortly after lockdown restrictions were lifted nationwide, Covid-19 cases began to balloon.
In the UK — the government Morrison specifically condemns in his songs — officials are considering a second lockdown. Many of the country’s restrictions were lifted earlier in the summer, but now that the country is seeing new cases surge upward of 3,000 every day, local officials have imposed targeted lockdowns.
Morrison’s three new songs will roll out digitally every two weeks beginning next week with “Born to Be Free.” He plans to perform them later this month at live shows.