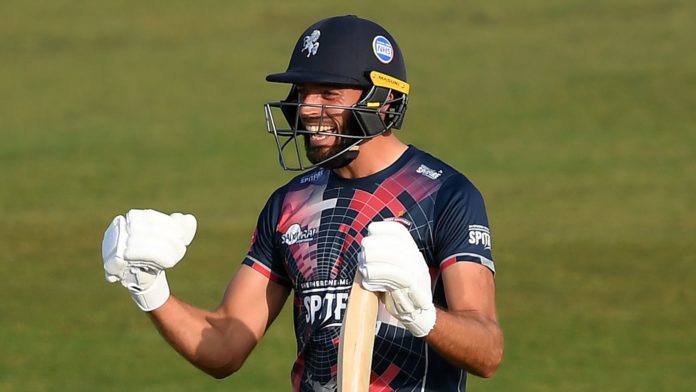 Surrey win to stay top, just a point separates Kent and Essex in second and third going into the final round of fixtures

Leaning, a winter recruit from Yorkshire, kept a cool head toward the end of a shaky Spitfires run chase to clinch their fifth qualifying win and secure second place behind current leaders Surrey, who Kent play at The Oval on Sunday.

Needing 168 for victory at an asking rate of 8.4 an over, the Spitfires found themselves in trouble as they slipped to 80-5 in the 11th over with Zak Crawley, Daniel Bell-Drummond, Joe Denly, Heino Kuhn and Sam Billings all having departed.

However, Leaning put on 67 for the sixth wicket with Alex Blake (29) to keep the hosts in contention before the latter fell to leave Kent needing 21 from 11 balls.

Leaning reached his half-century with a six from the last ball of the penultimate over, bringing Kent to within nine of victory, and after he clubbed another boundary, it was left to Grant Stewart to seal the win with a maximum. Kent vs Essex scorecard

George Garton had a day to remember with four wickets and a match-winning cameo of 24 from just nine balls as Sussex Sharks beat Middlesex by three wickets to keep their quarter-final hopes alive.

Garton took four wickets for the second time in his T20 career to help restrict Middlesex to 155-8 before making a spectacular contribution with the bat when he blasted 20 from five balls during the penultimate over from Steven Finn.

Middlesex seemed to have the game won when Sussex slumped from 70 without loss in seven overs to 121-6 with teenage leg-spinner Luke Hollman picking up 3-18, including Phil Salt for 56.

When Garton joined Aaron Thomason in the 17th over, Sussex still needed 45 but Garton swung the game back Sussex’s way by hitting Finn for two straight sixes and two boundaries. Although he holed out off the final ball of the 19th over, Sussex needed three to win and Thomason smashed the winning boundary off Tom Helm with four balls to spare.

Sussex need to beat Essex at Chelmsford in their final group game on on Sunday and hope Surrey overcome Kent, if they are to secure a top-two finish. Sussex vs Middlesex scorecard

Reece Topley returned to the Ageas Bowl to haunt depleted Hampshire as Surrey remained top of the South Group with a nine-wicket win.

England white-ball international Topley returned career-best figures of 4-20 to restrict his former county to 138-8 before Will Jacks (56) cracked his third consecutive fifty and Laurie Evans clubbed 81 not out in a 118-run partnership for the second wicket, as already qualified Surrey all-but booked a home quarter-final by easing to victory with 28 balls to spare.

Hampshire were forced to leave out four players who were self-isolating due to coming into contact with an individual with coronavirus symptoms.

The players, along with members of the coaching staff, are awaiting test results and should they come back negative, will be in contention to face Middlesex on Sunday. Hants vs Surrey scorecard