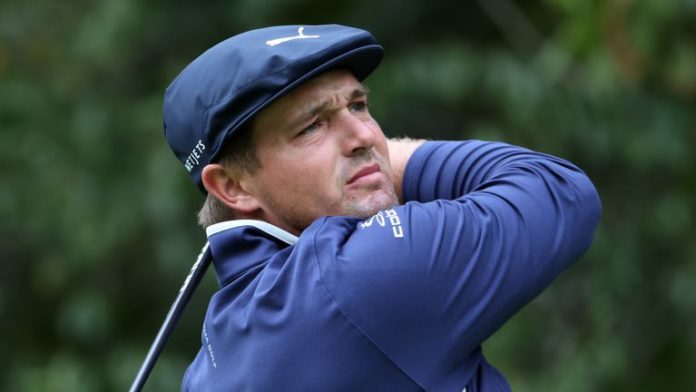 Bryson DeChambeau enjoyed a day of “impeccable” iron play after an evening working hard on the practice range paid off with a second-round 68 at the US Open.

DeChambeau was not satisfied with his wedge game despite opening with a one-under 69, and he was the last man standing on the range on Thursday night in a bid to identify why his wedges were “flying too far”.

After making the necessary adjustments to his equipment, the power-hitting American was far happier with his second-day performance at Winged Foot despite making five bogeys, with an eagle at his final hole setting the early clubhouse target at three under.

Four times in the round he followed a bogey with a bounce-back birdie and, after smashing his drive 380 yards down the ninth fairway, DeChambeau laced a 178-yard wedge to six feet and converted the chance for a closing eagle-three.

“I felt like a lot of things were working well for me,” he said. “I was driving it well, and my iron play was impeccable. When I got into trouble, I wasn’t able to get out of it as well today as yesterday, but when I was in the fairway I was able to attack and take advantage, and finished really well today.

“I hit a great drive on the ninth that just set me up to be able to attack that flag today, and that was a fun way to finish off at a US Open so far. It’s great.”

Volunteer marshals joked that DeChambeau was left to “shut the range down” late on Thursday evening, and he explained: “So my wedges yesterday weren’t that good. I was flying them too far and I wanted to know what the problem was and we figured out what the problem was.

“We just didn’t calibrate correctly, so I was flying everything 10 yards long consequently with my wedges. And we recalibrated all of them today, and I felt like they worked out really well.

“We didn’t practice them as well as I should have leading up to this tournament, but we made that adjustment, and it worked out beautifully for me today.

“I feel great, my confidence is at an all-time high right now, driving it well, iron play is fantastic, wedging is getting better each and every day, and I’m putting it like I know I can. So very happy.”

DeChambeau also revealed that some insight from Phil Mickelson helped persuade him to make sure his short game was in good order, particularly on a layout as tough at Winged Foot.

“Phil gave me some great advice,” DeChambeau added. “He said when he almost won back in 2006, he said he had the best short game week of his life, so that’s just a testament to showing that you have to have a great wedge game out here.

“I feel like my irons are great, the wedges are better, and short game needs to be worked on just a little bit. But I would say it’s been good so far, and that’s what I’m going to hopefully do this weekend.”