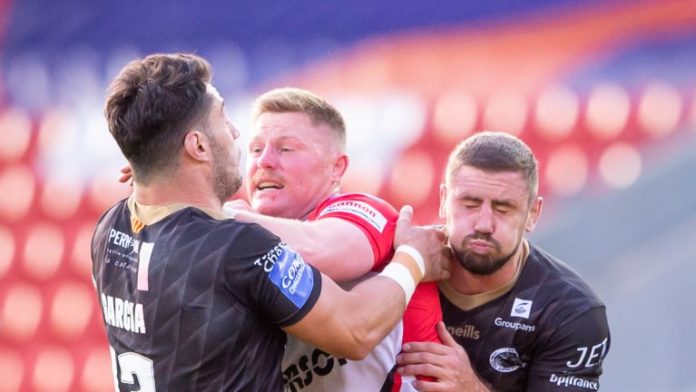 Salford are the first team through to the semi-finals of the Challenge Cup after coming from 12-0 down to beat Catalans Dragons 22-18 in extra-time.

The Red Devils needed a try from makeshift full-back Dan Sarginson in the first period of added time after the scores were locked at 18-18 after 80 minutes to finally settle the outcome of the first part of a double-headed quarter-final at St Helens.

It means that less than 12 months after guiding Salford to a maiden Grand Final, coach Ian Watson is just 80 minutes away from taking them to their first cup final for 51 years.

However, the Red Devils, who handed a debut to England centre Kallum Watkins, made the worst possible start, putting the ball out on the full from the kick-off and conceding a try after only two minutes.

Left winger Fouad Yaha finished off a well-worked crossfield move to open the scoring and, although James Maloney was wide with the conversion, he made amends shortly afterwards with a penalty.

The Australian stand-off then raced onto a pass from returning hooker Michael McIlorum to go over for the Dragons’ second try midway through the first half and his conversion made it 12-0.

Winger Krisnan Inu sparked the fightback in the 28th minute, drawing three defenders including Israel Folau to get Sarginson over at the corner.

He kicked the conversion to register the 1,000th point of his career and then took scrum-half Kevin Brown’s pass and fended off his opposite number Lewis Tierney to score a second try that cut the deficit to just two points.

It was all Catalans once more at the start of the second half and Salford were reduced to 12 men when substitute forward Pauli Pauli was sin-binned for a high tackle on Maloney.

Red Devils winger Rhys Williams managed to get underneath centre Sami Langi to prevent him touching down and the Dragons had a try disallowed for a knock-on by Folau.

The pressure eventually told after 52 minutes when second rower Matt Whitley forced his way over for the 2018 Wembley winners’ third try and Maloney’s third goal made it 18-10.

Watson would have been relieved to keep the Frenchmen to just six points while his side were down to 12 men and, with Pauli back on the field, they struck back through second rower James Greenwood, who stretched out for the line after front rower Gil Dudson had been held short.

Inu kicked his second goal and had a try disallowed after 65 minutes for a knock-on as the Red Devils pushed for the victory.

The momentum was with Watson’s men in the final quarter and they drew level three minutes from the end with a penalty from Inu after Catalans forward Sam Kasiano had been shown a yellow card for slowing down a play-the-ball.

Inu was twice off target with drop-goal attempts as the game entered extra-time and it was finally decided with a try as Brown ran the ball on the last tackle and Sarginson found himself in space on the left wing to deliver the killer blow.