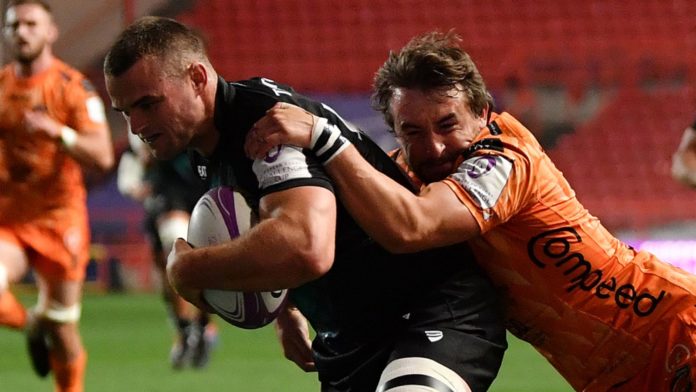 Bristol produced some scintillating rugby to destroy the Dragons 56-17 at Ashton Gate and book a European Challenge Cup semi-final place.

And Bristol’s Fijian centre Semi Radradra was also too hot for the Dragons to handle, setting up both of Earl’s tries through audacious approach play and adding a 60-metre score of his own.

Bristol will face Bordeaux-Begles – Radradra’s former club – or Edinburgh in a home semi-final next Friday, and they could take some stopping.

It’s all over at Ashton Gate and @BristolBears are into the #ChallengeCupRugby semi-finals! 👏 👏 👏@dragonsrugby fought hard but the hosts simply had too much firepower for them 🔥

Which of their stars impressed you most tonight? ⭐️ pic.twitter.com/bmrwhjcA91

The Dragons held a 10-point lead early on after wing Ashton Hewitt touched down and Sam Davies kicked a conversion and penalty, but Earl’s opener stirred Bristol into a try blitz of three in six minutes.

Number eight Nathan Hughes claimed the first, then Earl added a quickfire double and the combined effect left Bristol with one foot in the last-four, before lock Chris Vui and substitutes Max Malins and Dan Thomas crossed late on.

Fly-half Callum Sheedy kicked 21 points from three penalties and six conversions, and a Rhodri Williams try that Davies converted was all the Dragons could produce following their early onslaught.

Jones, British and Irish Lions supremo Warren Gatland and Wales boss Wayne Pivac all looked on as the Dragons made an impressive start.

Bristol found themselves under pressure in terms of territory, and the Dragons deservedly went ahead through a Davies penalty after Charles Piutau dithered in defence.

And matters quickly deteriorated for the Bristol full-back, who was again found out, this time by Hewitt, who bounced off his feeble attempted tackle and touched down after collecting Davies’ cross-kick.

Davies added the conversion for a 10-0 lead after 13 minutes, and Bristol needed to regroup quickly following a powerful statement of intent from their opponents.

Bristol needed a spark from somewhere, and wing Luke Morahan provided it, carving open the Dragons defence before the ball was quickly recycled and Vui sent Hughes over.

Sheedy’s conversion cut the gap to three points, before Radradra took centre-stage by creating a try for Earl four minutes later, then repeating it from Bristol’s next attack.

A third touchdown during a dazzling six-minute spell arrived when Radradra’s off-load put Earl clear, and the England international side-stepped Jordan Williams to round off a move of breathtaking quality.

Sheedy converted and then kicked a penalty as Bristol surged 14 points clear, consigning their early struggles to something from a bygone age.

The Dragons were unsurprisingly left shell-shocked by Bristol’s brilliance, but they managed to stop them pulling further away before half-time as the home side took a 24-10 interval advantage.

Just two minutes into the second period, though, and Radradra played havoc with them, this time doing it all himself after collecting Sheedy’s pass and leaving Dragons defenders floundering.

Sheedy’s conversion took Bristol past 30 points, yet the Dragons showed plenty of character and hit back through a Rhodri Williams try that Davies converted.

But two more Sheedy penalties kept Bristol comfortably ahead, then they finished with a flourish through three further touchdowns and emphatically underlined their status as Challenge Cup favourites.