Home Sport Scintillating Leeds too much for Rovers 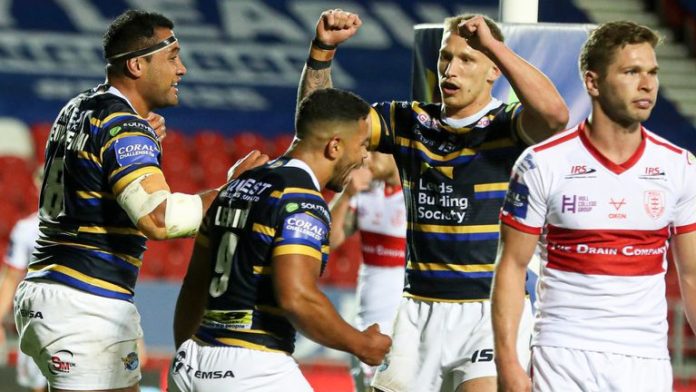 Hooker Kruise Leeming scored his first tries for Leeds as they booked their place in the last four of the Coral Challenge Cup with a 48-18 rout of Hull KR in their quarter-final at St Helens.

The Rhinos were boosted by the return of forwards Matt Prior, Rhyse Martin and Alex Mellor, who all sat out last week’s hard-fought win over Huddersfield due to Covid-19 track and trace protocols and contributed heavily to their quarter-final triumph.

After gaining a shock win over Wigan and taking St Helens to extra time in the previous two weeks, this seemed like a game too far for Tony Smith’s men, who trailed 30-0 at half-time.

The Rhinos book their place in the Coral Challenge Cup semi final with a comprehensive win over Hull KR having lead 30-0 at half time and including two tries for Kruise Leeming FULL TIME Rhinos 48 – 18 Rovers pic.twitter.com/4gZBrVy2hf

They made a shocking start, with winger Ethan Ryan fumbling the ball in his own 20-metre to give Leeds the perfect attacking position, and the Rhinos needed no second invitation as prop Ava Seumanufagai charged over for the first try with just five minutes on the clock.

That set the pattern for the opening quarter as Rovers struggled to get out of their own half.

Scrum-half Luke Gale broke clear to get left winger Ash Handley over, while Tom Briscoe and Harry Newman both produced some elusive running to breach the Rovers defence as Leeds shot into a 24-0 lead inside 20 minutes.

In a rare foray in the Leeds 20-metre area, Hull KR centre Shaun Kenny-Dowall got to within a foot of the tryline before succumbing to a tackle by Liam Sutcliffe and normal service was resumed when Leeming, a close-season signing from Huddersfield, forced his way over from close range for his first try for the Rhinos.

Trailing 30-0 at the break, the Robins made sure there would no repeat of their 50-0 rout in the 2015 final at Wembley when scrum-half Jamie Ellis kicked to the line and got the first touch to score the first of his two tries.

Seumanufagai was sin-binned for a dangerous tackle on Rovers second rower Matty Gee but 12-man Leeds extended their lead when full-back Richie Myler broke through the first line of defence to get Leeming over for his second try.

Substitute winger Luke Briscoe swooped on a loose pass to race in for Leeds’ seventh try but Rovers rallied, with replacement hooker Jez Litten demonstrating rapid acceleration from dummy half to score his first try for the club and Ellis adding his second of the match to give his team more respectability.

Leeds had the final say when second rower Martin proved too strong for the Robins defence as he powered his way through for their eighth try and maintained his perfect record with the boot by kicking his eighth goal for a 20-point haul.