Home Sport WRC – Ogier and Neuville locked in battle after five stages on... 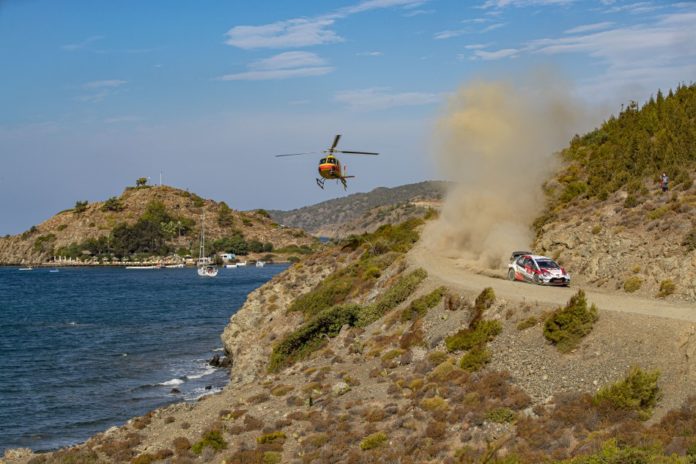 Six-time World Champion Sébastien Ogier and arch rival Thierry Neuville set up the prospect of a fascinating afternoon loop of stages at Rally Turkey on Saturday.

Two stage wins for Ogier and one for Neuville meant that the Toyota and Hyundai drivers were separated by just 1.6 seconds after three demanding morning specials. Overnight leader Sébastien Loeb slipped to fourth place and found himself embroiled in his own battle with Elfyn Evans and young Kalle Rovanperä for the final podium slot.

The shock news from the morning was the sudden retirement of defending World Champion Ott Tänak after a steering issue on the first stage of the loop on his Hyundai i20 WRC. The Estonian had been pushing hard to catch his rivals after losing vital seconds in hanging dust on Friday evening.

The M-Sport Ford trio of Teemu Suninen, Esapekka Lappi and Gus Greensmith were handily placed in sixth, seventh and eighth places while Pierre Louis Loubet was ninth in his second outing with the Hyundai i20 WRC.

Poland’s Kajetan Kajetanowicz overhauled Bolivia’s Marco Bulacia during the morning to lead FIA WRC3 and his pace had been sufficient to displace the FIA WRC2 leading Frenchman Adrien Fourmaux as well. The respective category leaders were 10th and 11th in the overall rankings.

Drivers plunged straight into the perils of the 31.79km Yeşilbelde stage and road-sweeping duties fell to Pierre-Louis Loubet and Gus Greensmith.

The FIA field had been whittled down to 22 overnight following the retirement of American Sean Johnston. The FIA WRC3 contender sustained accident damage after incident in the second stage on Friday afternoon.

Tänak was the quickest of the early runners and was on course to post an impressive stage time until he veered off the track 25.9km into the stage and collided with the banking. The crew managed to move the stricken Hyundai into a safe position further down the track and tried in vain to repair the damage, only to retire with hefty time penalties to follow.

Rovanperä carded the target of 25min 14,8sec but Evans shaved 11.8 seconds off the Finn’s effort to remain in fourth place. Attention then focused on the tussle between Ogier, Neuville and Loeb for the stage win. Loeb struggled with grip, ceded a handful of seconds as the stage progressed and slipped to fourth overall, but Ogier snatched the win and a 1.7-second outright lead with a time of 24min 54.2sec.

Eyvind Brynildsen dropped time to FIA WRC2 rivals Fourmaux and Pontus Tidemand before stopping near the stage finish and Kajetanowicz moved in front of Bulacia in FIA WRC3, as the front-runners headed to the faster and softer Datça stage (8.75km).

Rovanperä found himself locked in a tussle for fourth with Loeb and the Finn pushed hard to card a time of 6min 56.1sec. It gave him the fourth fastest time and he headed to Kizlan trailing the nine-time World Champion by 3.5 seconds.

The stage win fell to Ogier and the Frenchman extended his lead over Neuville to three seconds, his rival complaining that tyre choice had made the difference.

After a 14-minute delay in SS5 for safety reasons, action resumed with four World Rally Cars already en route to service and a regroup in Asparan after completing the stage. Neuville snatched the win and headed to the midday break trailing Ogier by just 1.6 seconds.

It set up the prospect of an fascinating repeat loop of the three stages on Saturday afternoon.