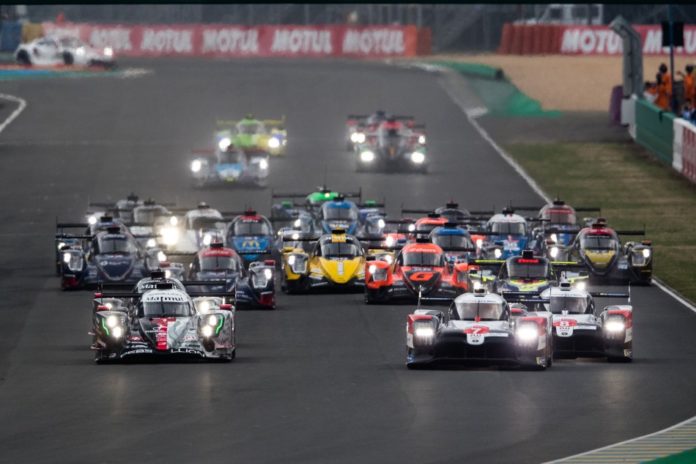 The 2020 24 Hours of Le Mans has begun with 59 cars taking the start of the 88th edition of the world’s greatest endurance race.

At the end of six hours of race, 25% of the race distance, the cars were under safety car conditions after the no52 AF Corse Ferrari went off into the barriers at Porsche Curves.

The no8 Toyota Gazoo Racing TS050-hybrid is the current leader with Kazuki Nakajima at the wheel, just ahead of the no7 Toyota of Jose-Maria Lopez.  The no8 Toyota suffered a puncture early in the race, with Sebastien Buemi forced to make a pitstop for fresh rubber.

The Toyotas are currently one lap ahead of the two Rebellion Racing R13s, with the no1 Rebellion of Norman Nato in 3rdplace.

In LMGTE Pro Aston Martin and Ferrari continue to tussle for the top spots. The class is clearly dominated by the #95 and #97 Vantages of Aston Martin Racing, and the #51 and #71 Ferraris of Italian outfit AF Corse. These four are regularly swapping positions, either out on the track or during the regular pit stops for refuelling, new tyres and driver changeovers.

Under the Safety Car it’s a Ferrari 1-2 after 6 hours with the no71 488 of Davide Rigon ahead of the no51 Ferrari of Daniel Serra.  The no97 Aston Martin Racing Vantage of Alex Lynn is third and one the same lap as the two leading Ferraris, while the no95 Vantage of Nicki Thiim is fourth.

The no92 Porsche dropped down the order after an unscheduled stop to repair a power steering problem.

The LMP2 battle is currently led by the no37 Jackie Chan DC Racing Oreca of Gaby Aubry, with the no26 G-Drive Racing Aurus of Jean-Eric Vergne and the no32 United Autosports Oreca of Will Owen in third.

The LMGTE Am grid is led by the n98 Aston Martin Racing Vantage of Paul Dalla Lana, with the no90 TF Sport Vantage of Salih Yoluc in second and the no75 Iron Lynx Ferrari of Andrea Piccini in third.

The oldest driver at Le Mans this year is now out on the track. Dominique Bastien, an American of French descent will be 75 years of age on 25 November. He nearly didn’t get a chance to take the wheel of the #88 Porsche following the incident in the first hour when Austrian Thomas Preining collided heavily with the tyre barrier.