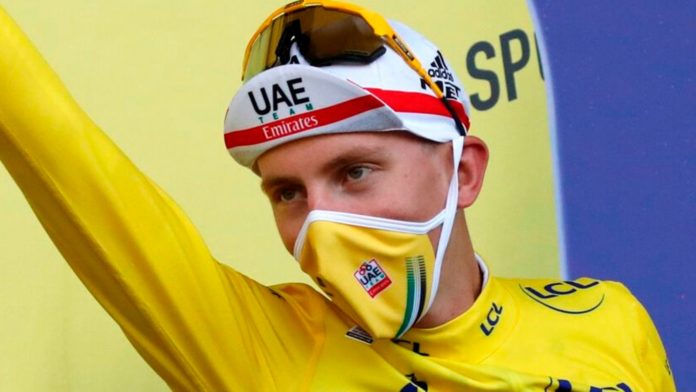 Tadej Pogacar: “My dream was always just to be in the Tour de France, and now I’m here and I’ve just won before tomorrow the last stage, it’s unbelievable.”

In one of the most dramatic finales to a Tour since Greg LeMond snatched yellow off the shoulders of Laurent Fignon in Paris in 1989, Pogacar delivered the performance of his young career to essentially win the race before Sunday’s traditional procession into Paris.

Pogacar, who turns 22 on Monday, will become the Tour’s second-youngest winner after the 19-year-old Henri Cornet won a very different event back in 1904.

This 36.2km time trial was supposed to suit the man who was spending his 11th day in the yellow jersey but Roglic looked off his game from the start before his ambitions were shattered on the steep gradients to the finish.

Roglic began the day with a 57-second advantage but by the time he rolled over the line, looking dishevelled and a little shocked, he had shipped almost two minutes to Pogacar, who said he had not been able to hear the time gaps on race radio due to the noise of the crowds.

It completed a remarkable three weeks for Pogacar, making his Tour debut and riding only his second Grand Tour after third place in the Vuelta a Espana – won by Roglic – last year.

He lost 81 seconds in crosswinds on stage seven but showed his strength as he won stage 14 and picked up more time on Roglic to keep the race alive.

The yellow jersey had changed hands on all four previous occasions the Tour had visited this climb in Vosges mountains but even so, few saw Saturday’s stunning climax coming as the UAE Team Emirates rider added both the yellow jersey and the King of the Mountains’ polka dots to the best young rider’s white.

“I think I’m dreaming,” Pogacar said before his interview was interrupted by Roglic, who picked himself up off the floor to embrace the new race leader.

“We were dreaming that from the start and we achieved that and it’s just amazing. It was not just me, it was all the team. We did the recon – I knew every corner, every pothole on the road, where to accelerate. It was a road you need to know and that’s all thanks to my team.

“My dream was always just to be in the Tour de France, and now I’m here and I’ve just won before tomorrow the last stage, it’s unbelievable.”

Roglic was behind Pogacar in the splits almost from the start, with his ride unravelling completely on the final climb after a slow bike change.

“Chapeau to Tadej, he obviously deserved it,” the 30-year-old said. “I just obviously didn’t push enough. I was more and more without the power that obviously I needed. I was just giving everything to the end.

“I can still be happy with the result and the racing we showed so let’s take the positive things out.”

It was not just the top of the standings that changed.

Richie Porte rode the time trial of his life, finishing third to overhaul Miguel Angel Lopez and claim his first career podium finish in the Tour in what the 35-year-old admits will be his last entry as a team leader before his expected move to the Ineos Grenadiers next season.

“It’s been a funny old race for me through the years with so many disasters and I almost had a couple here,” the Australian said.

“I came here with my wife’s blessing and missed the birth of our second child but to come away with a podium is incredible and I’ll have that photo on my wall when I retire.”

One of his future team-mates, Adam Yates, slipped back on the penultimate day but hung on to a top-10 finish, ninth overall for Mitchelton-Scott.

Though it was a good day for Ineos’ future, Pogacar’s ride up the final climb denied Richard Carapaz the polka dot jersey.

Sam Bennett’s sole mission was survival, staying inside the time cut to keep him on course to win the points classification in Paris on Sunday.

The Irishman has a lead of 55 points over Peter Sagan – winner of the green jersey a record seven times – and could have the classification wrapped up by the intermediate sprint on the run in to Paris, which would leave him free to
concentrate on a potential stage win on the Champs-Elysees.

“I think when I arrive into the Champs-Elysees and that first lap it’s going to be another thing that’s going to be amazing, I’ll probably have a tear in my eye,” Bennett said.

“It’s something you always dream about. I’m looking forward to the occasion and doing the best race we can possibly do and seeing if we can take home another stage.”