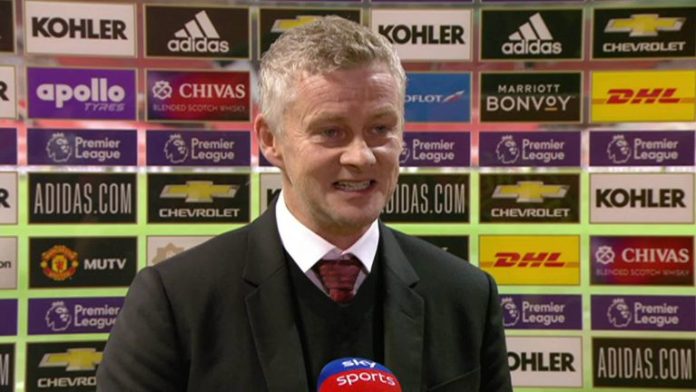 Ole Gunnar Solskjaer conceded his side got what they deserved as Crystal Palace secured a 3-1 victory over Manchester United at Old Trafford.

United were lacklustre throughout and were punished by their superior opponents as Wilfried Zaha scored twice to secure a second straight away victory against Solskjaer’s side having won 2-1 in the third gameweek of last season.

Palace were already in front when they were controversially awarded the chance to extend their lead from the penalty spot upon VAR review of a handball by Victor Lindelof, and there was further drama when the spot-kick was retaken after David de Gea had encroached in saving Jordan Ayew’s effort.

But Solskjaer was in no mood to make excuses after United suffered only their third opening-day home defeat in the Premier League era.

“We didn’t deserve to get anything from the game,” he told Sky Sports. “We started badly and slowly; we looked like a team early on in their preparation in pre-season.

“You could see that they came out flying out of the traps. You could see the difference between their prep with four friendlies and this is their third game this season whereas this is only our first game. We had one friendly last week but I think it showed. We were way short.

“You could see the physicality here this evening. They were sharper than us, they were stronger than us and we’ve got to catch up quickly. We can’t wait to have a normal pre-season and our next game [against Luton Town in the Carabao Cup, live on Sky Sports] is already on Tuesday.”

Solskjaer led the Red Devils to three cup semi-finals and third in the Premier League during a promising first full season in the hotseat, but a lack of transfer activity has since led to growing fan discontent.

Saturday’s season opener offered precious little relief from that pressure, and Solskjaer was asked if the defeat had hammered home the need for reinforcements if the side are to improve on last season’s third-placed finish.

“It’s hammered home that we need to improve,” he added. “That’s not good enough against any team in the Premier League, so we’ll have to work hard.

“We’ve had players here not in the squad tonight for different reasons. The training group we had this morning had seven players on it plus we had a big bench, so they’ll be knocking on the door saying they want to play the next one. Let’s see.”

Despite United’s evident shortcomings, there was a degree of misfortune about the nature of Palace’s second goal amid VAR drama and after a farcical period of video assistant referee intervention.

De Gea saved Ayew’s spot-kick after referee Martin Atkinson had checked the pitch-side monitor and adjudged Lindelof to have handled, only for Palace to be granted another attempt for the United goalkeeper marginally straying off his line.

Solskjaer said: “It was harsh – very harsh. I think the penalty decision is very harsh, and then it’s very harsh on David who makes a fantastic save. He’s probably one inch off the line so it’s hard to fathom and understand when he’s made the save. But rules are rules so we probably can’t discuss that one.”

Analysis: Not a pen, but that’s the rules

“I don’t think that was a penalty – but we have to accept, that’s the new (handball) rule. It’s harsh. And if you canvassed the majority of professional players, they would not want penalties given for that.

“Would the referee have given the penalty if there were 70,000 fans inside Old Trafford? The ref got it right by modern rules but I don’t think it’s making the game any better.”

“It was absolutely not a penalty. I have had enough of VAR. I’m so happy I’ve retired! They’re following the rules – but they’re killing the game.”

Crystal Palace boss Roy Hodgson was delighted with his team’s display, with the controversy surrounding the penalty incident diluted when Zaha was able to turn Lindelof and hit a low shot past De Gea five minutes from time.

Having won consecutive league games away against United for the first time, Hodgson told Sky Sports: “We played better this year than last year. It was a really deserved victory whereas last year we had to ride our luck on quite a few occasions.

“There were lots of shots at goal but we really restricted their opportunities to score and we had a lot more opportunities besides the three goals that we did score.

“This performance for me rates even higher than last year when you think of the improvements they’ve made to their team. We’ve got to be very proud of that. We always have the plan to start fast, but it’s not always carried out. I thought the shape of our team was fantastic and there were some incredible individual performances.

“For Mamadou Sakho to play the game he played after so little football for the past three months, was incredible. Jeff Schlupp has been out for some time too while the midfield and the back line were faultless. We’ve had two very difficult opening fixtures so to get six points on the board is very pleasing.”

On the penalty award and retake, he added: “I can only see why the penalty was awarded when I look at the video screen. You don’t notice it during the game. I thought it was an excellent opportunity for Jordan to put the ball in the back of the net, and the same with the retake – it’s impossible for us to see that with the naked eye.

“We’re not watching the goalkeeper, but some people will say ‘that’s what VAR is for’. Some people will say it’s for the referee to be helped out in those areas. It would be a pity if the discussion surrounding the game is going to be hinging on a penalty or a retake that perhaps shouldn’t have been given. I would like to focus on the fact that we played so well up here, and deserve the three points.”

Manchester United travel to face Luton Town in the Carabao Cup third round on Tuesday, live on Sky Sports (kick-off 8.15pm). Brighton host United in the Premier League next Saturday at 12.30pm.

Crystal Palace host Everton next Saturday at 3pm in the Premier League.