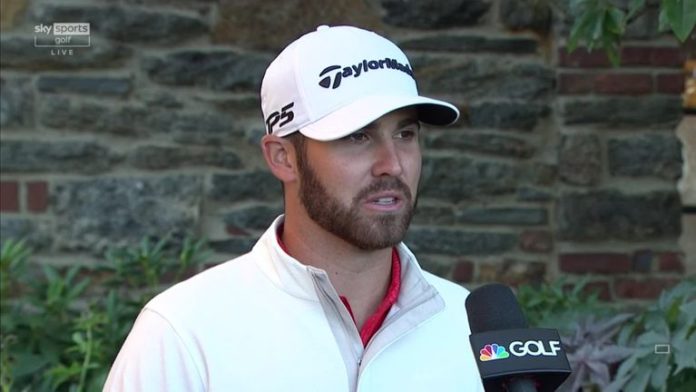 Watch the final round live on Sky Sports Golf. Coverage from Winged Foot begins at 1pm.

Matthew Wolff defied his inexperience in majors and the difficulty of Winged Foot as he powered into a two-shot lead after a captivating third round of the US Open.

Wolff fired an outstanding five-under 65 to put himself in prime position to celebrate his debut in the tournament with a victory, just a month after finishing tied for fourth in his maiden major appearance at the PGA Championship, while he is also aiming to be the first debutant winner since Francis Ouimet, 107 years ago.

Bryson DeChambeau and Louis Oosthuizen were the only other players to complete 54 holes under the card as Patrick Reed’s hopes nosedived with a horrendous inward 43, while Rory McIlroy gave himself an outside chance of ending his six-year major drought with an impressive 68 which left him six shots off the lead.

But Wolff was the standout performer on day three and looked every inch the epitome of the new generation of young golfers who are “combat ready” as soon as they join the professional ranks, a skillset demonstrated by Collin Morikawa when he lifted the Wanamaker Trophy in his second major start in San Francisco.

Day three as it happened

How the action in third round at Winged Foot unfolded …

His swing may be unorthodox, but his ball-striking and belief in his own abilities are unquestionable, and his lead could have been more commanding had he not missed three good chances from inside 10 feet to add to his tally of six birdies on a stellar Saturday.

But Wolff certainly holed his fair share, making a pair of 15-footers for birdies at the first and fourth, and with Reed unable to gain momentum early in his round, Wolff took control of the championship with three birdies in four holes which swept him to the turn in just 30 shots.

The 21-year-old consolidated his position at the top of the leaderboard with six cast-iron pars in a row before a pulled drive at 16 resulted in his only blemish of the round, pitching back out to the fairway and clipping a wedge to nine feet but misjudging the line of his putt for par.

However, he clawed the shot back at the last following a fortunate bounce out of the thick rough into the first cut when his tee shot leaked right, and he took full advantage of the favourable lie as he knocked his approach to 10 feet and nailed the putt to close on five under par.

“I think my putting was by far the best it’s felt in the last two or three months,” said Wolff, unconcerned at hitting only two of 14 fairways on day three. “I feel like I’m really hitting the ball well. My irons were really good, and even though I only hit two fairways, my driver was just barely off, but that’s the US Open.

“I feel like even though I missed the fairway, there were a lot of times I was in that graduated rough that’s a little shorter, and I feel like yesterday the difference was that I was in the really long stuff. But I felt really good with all parts of my game, and I’m just excited to be where I’m at and look forward to tomorrow.”

Wolff was three strokes clear of the field when he signed his card but DeChambeau, who had earlier bogeyed the opening two holes, closed within one when he made birdies at 16 and 17 only to end his round as he started, missing a six-footer for par in a disappointing end to a 70.

Reed kept himself within range of Wolff despite an uncertain start, with two birdies and a pair of bogeys over the first five holes, although he got back under par for the day when he birdied the ninth to get to five under par.

But the 2017 Masters champion lost his way after the turn and bogeyed the 10th before scrapping his way up the 11th and duffing a pitch from short of the green en route to a damaging double-bogey six.

Reed went into full-on freefall with three consecutive bogeys from the 13th and his miserable back nine concluded with back-to-back dropped shots at 17 and 18 which left him eight strokes off the pace heading into the final round.

Oosthuizen, who has a career grand-slam of runner-up finishes in majors, carded his fourth birdie of the day at the penultimate hole in his 68 which lifted him to one under, while Hideki Matsuyama, Xander Schauffele and Harris English go into the final round on level par.

Schauffele recovered from a rocky start with birdies at the sixth and eight followed by superb eagle at the ninth after drilling his second to 15 feet, but he dropped three shots in four holes from the 13th before finishing on a high with a good three at the last.

McIlroy’s torrid third-round 76 was quickly forgotten as he revived his hopes of a fifth major victory with a composed 68 featuring three birdies and just one bogey, an impressive response to a second round card containing seven bogeys and one double-bogey.

The runaway 2011 champion is on his own at one over and one ahead of Rafa Cabrera Bello, Viktor Hovland and two-time major winner Zach Johnson, while the world’s No 1 and 2 – Dustin Johnson (+5) and Jon Rahm (+7) slipped out of the running.