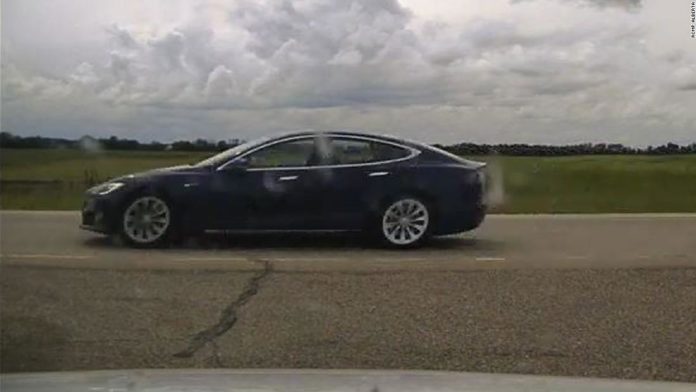 The Royal Canadian Mounted Police (RCMP) said it received a complaint of a car speeding near Ponoka, Alberta at around 4 pm on July 9.
The vehicle was traveling at more than 140 km (86.9 miles) per hour, with both front seats “completely reclined and both occupants appearing to be asleep,” the RCMP said.
When a police officer approached the vehicle with emergency lights the Tesla “automatically began to accelerate” to 150 km (93.2 m) per hour, the RCMP said.
After pulling him over, the officer charged the driver, who is from British Columbia, with speeding and suspended his license for 24 hours. After further investigation, police charged him with dangerous driving and he is summoned to appear in court in December.
“Although manufacturers of new vehicles have built in safeguards to prevent drivers from taking advantage of the new safety systems in vehicles, those systems are just that — supplemental safety systems,” Superintendent Gary Graham of Alberta RCMP Traffic Services said. “They are not self-driving systems, they still come with the responsibility of driving.”
Tesla did not respond to a request for comment from CNN.
The company has been adamant that drivers maintain control of the vehicle while the Autopilot system is in use, with a warning before it is first used saying drivers must keep their hands on the steering wheel and be prepared to take over at any time.
While Autopilot can keep the vehicle in a highway lane and maintain distance from traffic, it is not a fully autonomous system and still requires driver oversight.
But it is not the first time the car manufacturer and Autopilot have been embroiled in a traffic incident — though the company has defended the technology.
Last year, a 50-year-old man died in a car crash after switching from manual mode to Autopilot, according to the National Transportation Safety Board (NTSB).
And in 2018, Apple employee Walter Huang died when his car veered off a highway to the left, accelerated and crashed before bursting into flames. The Autopilot feature had been engaged for nearly 19 minutes, the NTSB found. His family announced last year they were suing Tesla, claiming the feature caused his death.
At the time, Tesla said that the only way the vehicle could have crashed is if Huang had not “paid attention” to the road, “despite the car providing multiple warnings to do so.”
Another man, Joshua Brown, died in May 2016 when his Tesla crashed into a tractor-trailer in Florida while the software was active.

CNN’s Jackie Wattles and Peter Valdes-Dapena contributed to this report.