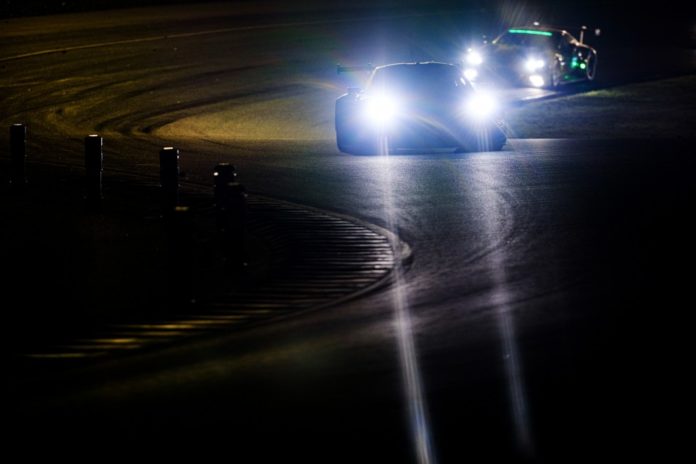 Despite gathering storm clouds, and the threat of rain,  the 24 Hours of Le Mans has stayed dry for the first 12 hours of the race.  The drivers now face the long night with almost 12 hours of running in the dark.

The Two Toyota TS050 Hybrids continue to lead the way with the no7 Toyota of Kamui Kobayashi completing 190 laps in the first 12 hours, one lap ahead of the no8 TS050 of Brendon Hartley after the car had to go into the garage for work on the front of the car.

The two Rebellions are third and fourth, the no1 R13 in third two laps behind the lead car.  The no4 Bykolles retired earlier after the rear wing detached pitching Bruno Spengler into the barriers, bringing out the Safety Car for a lengthy period.

The no51 AF Corse Ferrari of 2017 World Champion James Calado is leading the LMGTE Pro category 10 seconds ahead of the no97 Aston Martin Racing Vantage with Harry Tincknell at the wheel.  The no71 Ferrari, which had been challenging for the class lead, had technical trouble and had to pit for repairs in the 11th hour.

United Autosports are enjoying a 1-2 in the LMP2 category at the halfway point of the race, with the no32 Oreca of Will Owen leading the no22 Oreca of Paul Di Resta by less than a second.

There were several LMP2 retirements in the last few hours, with the no31 Duqueine Oreca of Tristan Gommendy hitting the guard rail, which forced a lengthy repair first under the safety car and then under a Slow Zone.  The no33 High Class Racing Oreca was also a retirement.

The no37 Jackie Chan DC Racing Oreca was shown the black flag after the team were found to have delivered a part to the driver who had stopped on track earlier in the race.  The car was repaired but this is a breach of the regulations and the car was disqualified (Stewards Decision no88).

In LMGTE Am the leader at the 12 hour point is the no98 Aston Martin Racing Vantage with Augusto Farfus at the wheel, the Brazilian 1.5 seconds ahead of the no90 TF Sport Aston Martin Vantage of Charlie Eastwood.