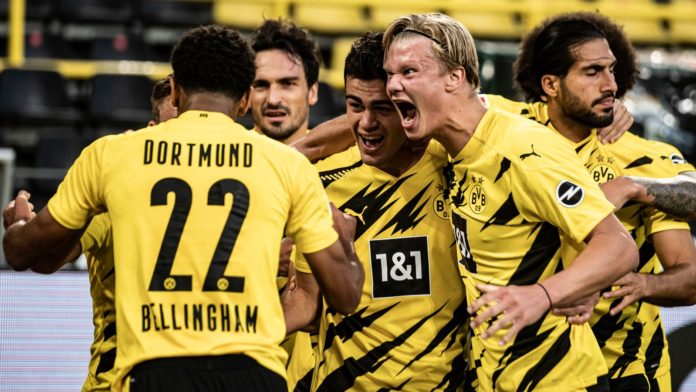 Jadon Sancho provided a superb assist as Borussia Dortmund started their Bundesliga campaign with a 3-0 victory at home to Borussia Monchengladbach.

Sancho has been heavily linked with a move to Manchester United, but a deal has so far failed to materialise.

While United struggled against Crystal Palace, Sancho showed them what they’re missing with an excellent assist for Dortmund’s second goal. He picked the ball up in his own half and burst forward before finding Erling Haaland for the third.

Haaland scored twice and teenager Giovanni Reyna added another as they cruised past Gladbach in their season opener.

The 20-year-old Haaland scored a 54th-minute penalty, awarded for a foul on Reyna, and bagged another with a sensationally quick counter-attack as Dortmund utilised their fearsome youthful attacking weapons.

Reyna opened the scoring after combining perfectly with his fellow 17-year-old Jude Bellingham in the 35th minute. His first league goal made him the second-youngest American to score in the league after Christian Pulisic.

The hosts, playing in front of a crowd limited to 9,300 fans in their 80,000-capacity stadium due to Covid-19 restrictions, also hit the crossbar with a Sancho header.

Earlier, Hertha Berlin overpowered Werder Bremen 4-1 in their Bundesliga opener on Saturday – their first win there in 14 years.

Hertha, who announced a 127m-euro investment in June in a bid to eventually close the gap to the top, barely had any chances until they struck twice in three minutes late in the first half.

Peter Pekarik was left unmarked at the far post and tapped in for the lead in the 42nd minute.

Forward Dodi Lukebakio then stunned the hosts – and the 8,500 home fans allowed to attend the match – firing in a second on the stroke of half-time.

With Werder forced to go forward, Hertha found the space to score again, with Matheus Cunha wrong-footing keeper Jiri Pavlenka with a low shot before newcomer Jhon Cordoba added his first goal for the club in the 90th minute.

Davie Selke had earlier cut the deficit in the 68th minute with a close-range header against his former club.

Freiburg were made to sweat against VfB Stuttgart, eventually edging past them 3-2 having gone 3-0 up before a late scare. Andrej Kramaric scored a hat-trick to hand Hoffenheim a 3-2 win at Cologne, who had equalised twice.

Bayern Munich kicked off their season with an 8-0 demolition of Schalke on Friday.

An early strike from Antoine Griezmann gave Barcelona a 1-0 win at home to Elche in their final pre-season friendly on Saturday, making it three victories from three for Ronald Koeman’s side.

Griezmann slotted home a Jordi Alba cut-back in the second minute in the Joan Gamper Trophy but Barca could not build on their lead against Elche, who have been promoted back to La Liga after a five-year absence and stayed in the game until the end.

Diego Bri should have equalised for the visitors late on but was thwarted by an impressive save from Barca keeper Neto.

Barca’s teenage sensation Ansu Fati looked sharp in his first start after returning from injury while new signing Miralem Pjanic made his debut when he came off the bench in the second half.

Unai Emery earned his first win as Villarreal coach after his side came from behind to beat Eibar 2-1 at home on Saturday in La Liga.

After being held to a disappointing draw with promoted Huesca last week, Villarreal again fell behind at home to humble opposition when Kike Garcia put Eibar ahead five minutes into the second half.

Emery sprung a double substitution shortly afterwards and the changes paid dividends as Gerard Moreno levelled in the 63rd minute and then played in Paco Alcacer, who rounded the goalkeeper to tap into the net from a tight angle in the 71st.

Pervis Estupinan should have grabbed a third goal in added time but he somehow fired over the bar on the rebound with the goal gaping, and his side had to defend deep in the final minutes to see out the victory.

Serie A: Roma held by Verona

AS Roma were held to a 0-0 draw at Verona in their opening Serie A game of the season on Saturday as they began a new era under the ownership of the Texas-based Friedkin Group who took over the club last month.

Verona hit the woodwork in each half while Roma also struck the bar but otherwise gave a disjointed performance in front of billionaire owner Dan Friedkin and his son Ryan, who both saw the match on a balmy evening at the Bentegodi Stadium.

Meanwhile, Fiorentina grabbed a late goal through Gaetano Castrovilli to beat visiting Torino 1-0 in the opening match of the new Serie A season.

Castrovilli was left unmarked at the back post to volley in a cross from Federico Chiesa 12 minutes from time.