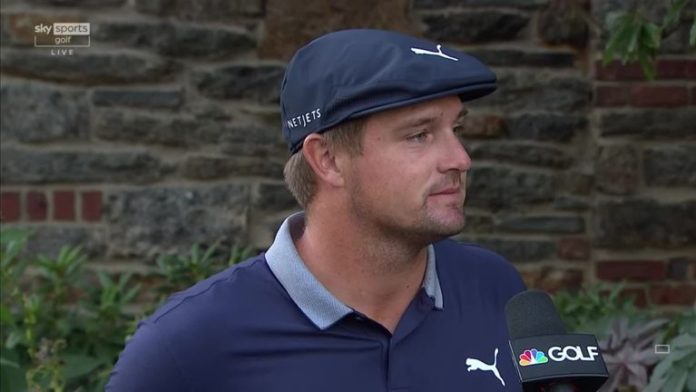 Bryson DeChambeau insisted he will persevere with his aggressive strategy as he heads into the final round of the US Open just two shots off the lead.

DeChambeau vowed to stand by his pre-tournament pledge to take the attack to fearsome Winged Foot even if he is still in contention down the stretch, unconcerned by the similar tactics which contributed to Phil Mickelson’s downfall at the same venue 14 years ago.

While Matthew Wolff powered into the outright lead on his US Open debut, DeChambeau recovered well from a bogey, bogey start and ignored the spectacular of playing-partner Patrick Reed over the back nine, hauling himself from three behind to within one of the leader with birdies at 16 and 17.

A bogey at the last was a disappointing end to a level-par round of 70, but DeChambeau is relishing the prospect of playing in Sunday’s final pairing alongside Wolff, who is competing in only his second major, but he conceded he needed to improve on his “pathetic” driving on day three.

Day three as it happened

How the action in third round at Winged Foot unfolded …

“I’m going to be aggressive no matter what,” said DeChambeau, who finished in a tie for fourth at the PGA Championship last month. “If it’s the right play, if it’s the right wind and the right situation.

“Worst-case scenario is hitting hybrid out there in the middle of the fairway, and that’s what has worked so far, but today it cost me a little bit. I didn’t hit it in the fairway and you’ve just got to hit fairways out here.

“I’ve just got to make sure my speed is a little bit better than it was starting out the round and hitting the driver in the fairway. Today was pathetic and it needs to be better than that to win a US Open.

“The round today was a huge battle, but I was proud of the way I persevered out there. It was difficult, especially when you’re not hitting it straight in the fairway. For me it felt like I kept myself in it, scrambled really well.

“Got to do that tomorrow, but I also have to hit some more fairways. I know that. I’m going to work on that tonight and make sure I’m doing that on Sunday.

“The past two majors I’ve played in I’ve been right in contention, and I am excited to be in this position for sure. There’s no better place to be.”

Mickelson needed a par at the last to win his first US Open in 2006 only to carve his drive way right of the fairway en route to a double-bogey six, but DeChambeau will not hesitate to whip the cover off his driver if he feels it is the right play, whatever the tournament situation.

“If the situation is right and driver makes sense,” he added when asked if he would consider hitting driver at the 72nd hole. “Blast it up there, hit it in the rough and then hit a wedge on the green where it feeds off the back part of the slope, it makes sense.

“I haven’t done it this week, though, so I’ve just got to hit a better hybrid. I did not today – I just started out to the right and didn’t draw it back.”