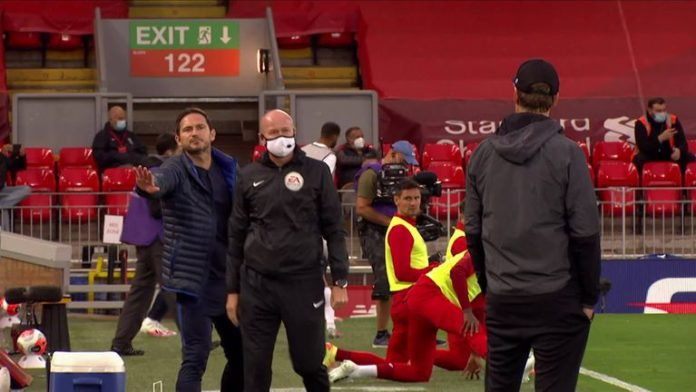 Chelsea and Liverpool has been a heated rivalry during the Premier League era but the appointment of Frank Lampard at Stamford Bridge appears to have added extra spice given his exchanges with Jurgen Klopp, on the touchline and in the media, in recent months.

Now, as Liverpool prepare for their first away game of their Premier League title defence, it is perhaps appropriate that they travel to Chelsea – the biggest spenders of the summer and a club aiming to close the gap on the champions to become genuine challengers this season.

How the row started

Lampard was the visiting manager on the night that Liverpool celebrated their first title win in 30 years in July – and made his presence felt on the touchline with some choice words following a dispute with several figures on the opposition bench at Anfield.

“Fair play to Liverpool Football Club, they have won the league,” Lampard told Sky Sports after the game. “But also do not get too arrogant with it. That was my point, but it is done.”

Klopp can be vocal on the touchline himself but did not take kindly to Lampard’s decision to fan the flames after the final whistle with this accusation of arrogance.

“Frank was in a really competitive mood and I respect that a lot. You can pretty much, from my point of view, say what you want in a situation like that. For me, it’s after the game. It’s completely over. I have said a lot in the past because it is pure emotion. But what he has to learn is to finish it with the final whistle and he did not do that.

“Speaking after it like this is not OK. Frank has to learn. He has a lot of time to learn, he is a young coach. But he has to learn.”

With the season over, all seemed to be forgotten but Klopp’s decision to highlight Chelsea’s spending and contrast it with that of Liverpool during the transfer window changed all that.

“We live in a world at the moment with a lot of uncertainty,” Klopp explained. “For some clubs it seems to be less important how uncertain the future is – owned by countries, owned by oligarchs, that is the truth. We are a different kind of club.

Klopp was speaking in the wake of Chelsea signing Timo Werner for £50m – a deal that Liverpool found a little too rich for their tastes despite interest in the striker’s talents.

With Lampard also being provided the funds to acquire Hakim Ziyech, Thiago Silva, Ben Chilwell and Kai Havertz this summer, there is no denying that he has been backed.

However, the Chelsea boss bristles at the notion that Liverpool’s journey to becoming Premier League champions did not come with considerable spending of their own.

“I was less annoyed with it, I found it slightly amusing,” said Lampard. “It is a fantastic story of a club – over four and a half, five years that Jurgen Klopp’s been there – that have managed to get recruitment right to a really high level.

“The really smart thing they have done is believe in their coach and system for a number of years. It’s a great story, but it is story that has seen money spent on players. What we have done is come off the back of a ban and tried to address the situation to improve.”

Does Lampard have a point?

There is some mitigation here that helps to explain Chelsea’s lavish spending. As alluded to by Lampard, the club’s earlier transfer ban had allowed them to stockpile funds for the summer so it was no surprise to see owner Roman Abramovich dip into the market.

It is also worth acknowledging that while Liverpool do not have the sort of external funding enjoyed by some of their rivals, this more organic growth has not prevented spending.

Alisson Becker arrived for a world-record fee for a goalkeeper when Liverpool paid £67m for his services, while the £75m paid for Virgil van Dijk was a world record for a defender.

Liverpool’s brilliant front three of Mohamed Salah, Sadio Mane and Roberto Firmino have all proven bargains but still cost around £100m to assemble at Anfield, while Klopp boasts options in a midfield that includes no fewer than five players who cost £20m or more.

But that is not the whole story

Such spending does not seem so big when the departures from Anfield are factored in. Indeed, the purchase of Van Dijk was entirely funded in the same transfer window by the huge £145m fee that Barcelona paid for Philippe Coutinho that January.

Liverpool’s clever work in the market has seen them recoup money from the sale of squad players too, with Bournemouth paying big sums for Jordon Ibe and Dominic Solanke. Since Klopp’s arrival, the club’s net spend is a mere fraction of the Manchester clubs.

It is a testament to Klopp’s fine work, although there is perhaps an element of self-interest in Lampard’s claims that the German’s success is an argument for sticking with a manager over an extended period. How he would love Chelsea to wait so long for a first trophy.

But Klopp’s track record demanded time, having won back-to-back Bundesliga titles with Borussia Dortmund. While Lampard had lost a Championship playoff final with Derby County at Wembley, Klopp’s high-profile defeat there had come in the Champions League final.

In the immediate build-up to the game, both managers sought to calm the mood, painting this so-called rivalry as a media construction rather than a case of any genuine animosity.

“There is a lot of airtime for you to have to fill with talk of these rivalries so I understand that sometimes they can be scrutinised in every possible way,” said Lampard.

“I have got a huge amount of respect for him as a manager, I always have. What he has done at Liverpool in the course of time has been incredible and that’s on him as the focal point of the club. There is nothing in it for me. The competitive nature of the 90 minutes can always slightly boil over. The respect I have for Jurgen Klopp will never change.”

Klopp has also sought to defuse the rivalry.

“When you ask me a question, I answer it and everybody takes it the way they want to take it,” he added. “It might be a language issue or something. You made up a story that I said about the ‘transfer behaviour of Chelsea’. What I said was in the situation we are in, we cannot deal with the situation the same as other clubs. One of them was Chelsea.

“Then you create a rivalry between Frank Lampard and me. Why? We meet two or three times a year. I respect a lot what he’s doing. He’s probably a really nice guy, but I don’t know because I don’t know him privately and he doesn’t know me.

“I have no problems, none at all, with Frank Lampard.”

Will the truce hold? Find out on Sunday.

Chelsea vs Liverpool will be broadcast live on Sky Sports Premier League from 4pm on Saturday; kick-off at 4.30pm. Sky Sports customers can watch in-game clips in the live match blog on the Sky Sports website and app. Highlights will also be published on the Sky Sports digital platforms and the Sky Sports Football YouTube channel shortly after the final whistle.