Home Sport All Change at the Front – 18 Hour Report 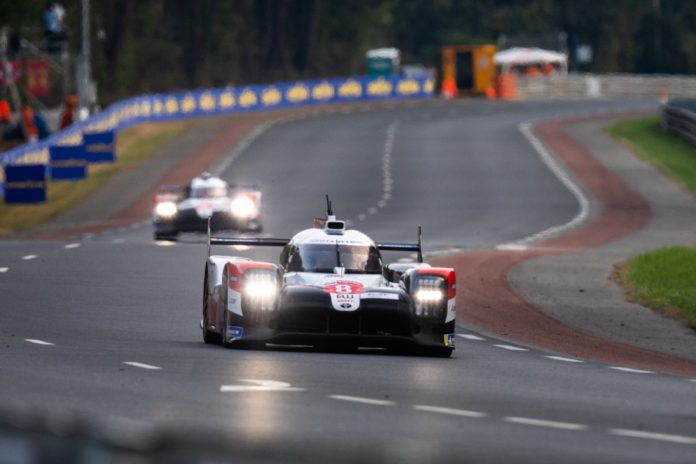 As the sun rose above the Circuit de La Sarthe the big news of the last six hours was the no7 Toyota had to pit for a power issue that forced the team to make a lengthy pitstop to change the turbo.  The TS050 Hybrid regained the track in 4th overall but six laps behind the leading no8 Toyota and two adrift of the third placed no3 Rebellion R13.  The no1 Rebellion is second two laps behind the no8 Toyota.

The battle of the race is still between Aston Martin and Ferrari with the British and Italian teams taking it in turns to lead.  Aston Martin are currently leading with the no97 Vantage of Harry Tincknell holding a 30 second lead over the no51 AF Corse 488 of James Calado.  The no95 Aston Martin is third but one lap down and the no71 Ferrari is fourth but a further lap behind.

The no91 Porsche 911 RSR-19 suffered the same power steering issue as the sister car and had a lengthy stop for repairs and is currently in 35th overall and 6th in class, while the no92 911 is down in 42nd overall.

The no22 United Autosports Oreca is leading the LMP2 category but the no32 car suffered an oil leak and had to pit from the class lead for repairs and is now 14th in class after the lengthy stop.

The no38 JOTA Oreca is second, over a minute behind the lead car, with the no26 G-Drive Racing Aurus in third but off the lead lap.  The Racing Team Nederland Oreca, which had been at the forefront of the class had two spins, the second at Dunlop with Frits Van Eerd beaching the car in the gravel forcing the slow zone to be activated to allow the marshals to safely recover the car.  The no29 Oreca is now running 16th in LMP2.

It was a bad few hours for the no98 Aston Martin Racing Vantage after leading the class.  The Aston Martin mechanics had to get to work on the car after it pitted with suspected suspension failure.  After a lot of lost time the no98 Vantage re-joined in 12th in class and 6 laps down on the leaders.

It wasn’t all bad news for the British manufacturer as the no90 TF Sport Aston Martin is leading the LMGTE Am category one lap ahead of the no 77 Dempsey-Proton racing Porsche, with the no83 AF Corse Ferrari in third, nearly 60 seconds behind the second placed Porsche.