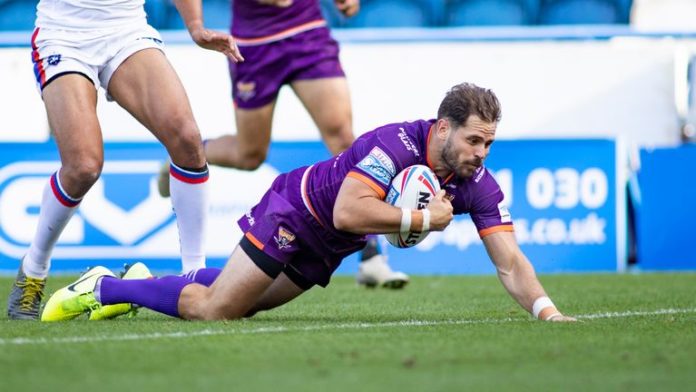 Robinson: “The amount of mistakes I made has probably held me in good stead for where I am today”

The day after overseeing Huddersfield Giants’ first Super League win since the season resumed, Luke Robinson was back at his old amateur club Siddal coaching the youth section his three sons of different ages are now members of.

The Halifax native has maintained links to the Exley Lane side where he first played rugby league throughout his professional career, not least of all because it was them who gave him his first start in coaching at the age of 21.

Robinson has fond memories of that period, recalling the camaraderie of the community game and the long coach journeys back from some of the National Conference League’s Cumbrian outposts with the drink flowing.

Fantastic performance from the @Giantsrl under the leadership of our own @luke_robinson9 well done Robbo!!! 👏👏👏🏉💙 pic.twitter.com/gC7FDo1Wzl

That appointment at such a young age taught him some valuable lessons for what has become his post-playing career too, even if Robinson admits he got a lot wrong during his time in charge of Siddal’s senior team.

“I learnt a lot and I can only apologise to my friends and everyone I know down at Siddal because I was rubbish when I look back,” Robinson said.

“When Browny came [to the Giants] in 2009, that’s when my eyes were really opened to the way the game should be played and I saw the game in a totally different light. Unfortunately for my Siddal mates I didn’t see it that way at the time!

“But the amount of mistakes I made has probably held me in good stead for where I am today.”

No amount of coaching experience could have prepared him for the situation which saw him thrust into the role of acting head coach last Wednesday though.

The squad and staff had already had a disrupted morning when the news came through from the RFL that a player from the previous week’s opponents Leeds Rhinos had tested positive for coronavirus, meaning training would have to be put on hold until the track and trace process was completed.

While that was going on, the Giants announced Simon Woolford would be leaving his role as head coach with immediate effect rather than at the end of the season as originally planned.

I’m extremely proud. It’s been my club for a number of years and it’s something I haven’t taken lightly. Telling my little boys I’ve got the opportunity to coach has been great.

That saw assistant Robinson elevated to the top job and left him little time to prepare his first training session ahead of the Thursday afternoon Super League match against Wakefield Trinity.

“We had a quick meeting and I basically had half an hour to organise myself and get the lads ready,” Robinson said.

“I’m extremely proud. It’s been my club for a number of years and it’s something I haven’t taken lightly. Telling my little boys I’ve got the opportunity to coach has been great.

“You never want to take it on under these circumstances as a friend and an assistant. My job was to assist Simon as much as I could, but on the flip side to coach the club is a very proud moment for me.”

Robinson has been part of the backroom staff at Huddersfield since his playing career, which also included spells with Wigan Warriors, Castleford Tigers and Salford, was brought to a premature end by a hip injury ahead of the 2016 season.

The former Giants half-back has made no secret of his desire to become head coach on a permanent basis, although his immediate focus is building on the 29-6 win over Wakefield and returning to the level of performances shown by Huddersfield pre-lockdown.

“Everyone has ambitions and aspirations to be a head coach and I’m just like everyone else,” Robinson said. “I do understand I’ve escalated the coaching ladder a little bit quicker than some because I’ve only been doing it for four years.

“But I believe in myself, I know I’m a good coach and it’s something I’ve always had an eye on. Whether it happens at the end of my tenure here during this short period of caretaker coach is yet to be decided.

I believe in myself, I know I’m a good coach and it’s something I’ve always had an eye on.

“But my firm focus is to get us playing the type of rugby we were playing pre-lockdown and get that belief back. I believe in the players and the group we’ve got.

“I think they’re an incredible group of people and second to that they’re really good players. We showed before lockdown we can compete with the big boys and my main focus is trying to get us back to that style and that brand of rugby.”