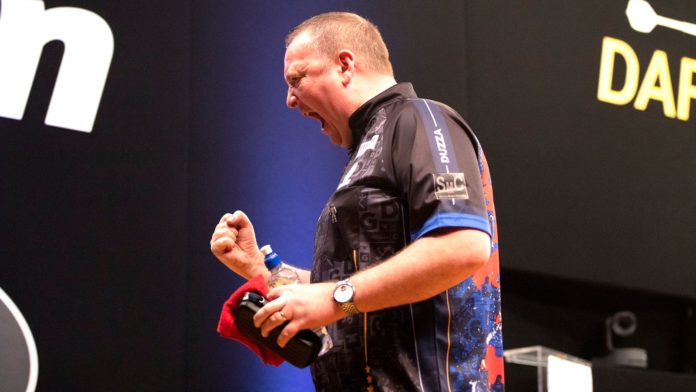 Glen Durrant produced a brilliant performance to inflict another defeat on Michael van Gerwen to end the world No 1’s hopes of another World Series of Darts title.

Van Gerwen has dominated the World Series Finals, winning four of the five titles but that won’t be the case this year as Durrant continued his record against the Dutchman.

Until last week, Duzza had not lost in four meetings but Van Gerwen recorded a victory at the Autumn Series on his way to the Day Three title in Germany, but Duzza recorded a fourth win over the world’s best in a high-quality encounter in which neither man much much of a mistake.

With more than 1,500 fans in attendance at the Salzburgarena, both men averaging more than 100 and with nothing to separate them over the opening eight legs, Durrant finally seized the initiative with a 68 checkout to move 5-4 up.

Van Gerwen had a chance to break back in leg 10, but a miss at tops allowed the three-time Lakeside Champion in to hit the same bed and claim victory and a quarter-final date with James Wade – the only other man to win the World Series Finals crown.

The video of now needed to be in slow-mo. Anyway, I’ve been studying it for weeks, during and after the Premier League at MK. There’s absolutely no change. He’s just lacking composure and confidence, this makes him releasing inconsistently. Technically not a thing has changed.

“That’s a great win for me, I felt good tonight and I knew what was at stake – I realised I was playing the best player in the world,” said Durrant, who beat World Matchplay champion Dimitri Van den Bergh in Friday’s first round.

“He’s the biggest challenge in the world right now and the second greatest player who’s ever picked up a set of darts.

“My CV compared to him is a million miles away – I think I’ve got an issue in his head, and that could be with the pace, but that’s something he has to deal with, not me.

“I know I’m a good player but this has all come really quickly. I’ve got to be really proud and I believe I’m up there with the best double hitters in the world right now. I’m in a fantastic place.”

Durrant is now three wins away from the first televised title of his PDC career having suffered semi-final defeat on four occasions since his switch from the BDO last January.

After an opening day that had seen many of the higher-ranked players falter – Dave Chisnall, Ian White, Joe Cullen and home favourite Mensur Suljovic all joined Fallon Sherrock in losing at the first-round stage – the seeds hit back on Saturday.

Van Gerwen was the only one of the eight seeded names to crash out as the rest of the big names eased through.

Nathan Aspinall, Gerwyn Price and world champion Peter Wright all averaged more than 100 but it was Daryl Gurney who produced the evening’s best display, averaging 102 on his way to a 6-2 over Cody Harris and a last eight day with Snakebite.

The action continues on Sunday with the champion crowned after a mammoth day in Salzburg, which starts with the quarter-finals in the afternoon and ends with the semi-finals and final in the evening session.